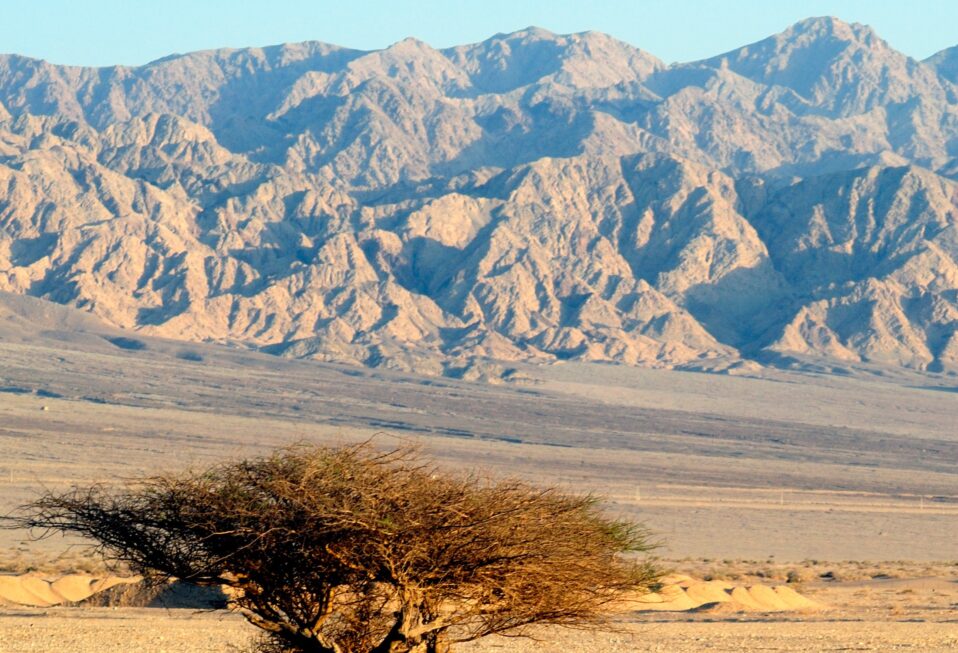 The land of Edom lay south of the land of Moab in the Transjordan. The Zered Ravine, which empties into the southern end of the Dead Sea, formed the boundary between these two kingdoms. The Bible refers to Edom also as Mount Seir (Genesis 36:21; Ezekiel 35:15).

The plateau that forms the heartland of Edom, south of the Zered, is over 5000 feet above sea level, and some of its peaks reach a height of 5696 feet. Deep gorges cut through the western part plateau opening into the Rift Valley; only on the eastern frontier does the form of a plateau remain. Only a narrow strip on the western edge of the mountains received sufficient rainfall (200 mm) to produce any significant vegetation, mostly in the form of natural forest. Along this line, a line of towns was established.

The limited agricultural potential of this region is acknowledged in Isaac’s blessing of his son Esau, who the Bible identified as the father of the Edomites (Genesis 27:38-39). Its agricultural limitations were compensated for by its presence along the southern end of the King’s Highway, the gateway from the Arabian Peninsula for incense, gold, and other luxury items.

Also, Edom controlled the copper mines and trade in the southern Aravah (the southern portion of the Rift Valley north of the Gulf of Eilat). The port of Ezion-Geber on the northern shore of the Gulf of Eilat also received goods from the Red Sea, which would then be conveyed to various destinations via the trade routes that ran through Edom.

The capital of Edom in the Old Testament period was Sela. Edom’s location along important trade routes put them in conflict with Judah for control of the Aravah (south of the Dead Sea) and Ezion-Geber.

When Israel sojourned in the Transjordan, they sought to pass through the land of Edom following the King’s Highway, but the king of Edom denied their request. They had to circumvent Edom using the Desert Highway, which lay further east of the kingdom of Edom (Numbers 21:4; Deuteronomy 2:8; and Judges 11:16-18). The Old Testament condemns Edom’s lack of hospitality (Deuteronomy 23:3-6).

Throughout the kingdoms of Israel and Judah, conflict arose between the people and the Edomites, especially with the kingdom of Judah. During the reign of Jehoshaphat, king of Judah, a coalition of the Edomites, Moabites, and Ammonites sought to invade Judah (1 Kings 22:47-49; 2 Chronicles 20). The Edomites revolted in the time of Jehoram and established their own king (2 Kings 8:20-22).

The prophet Obadiah condemned the Edomites for gloating at the destruction of Judah (Obadiah 1:13-14; see Psalm 137:7; Ezekiel 16:57; 25:12-14; 35). The Babylonian deportation of Judeans left a population vacuum in Judah; this led to a number of Edomites immigrating into the biblical Negev and the southern Judean Hill Country around Hebron.

In the Hellenistic period, these Edomites living in the southern Judean Hill Country and the biblical Negev were known in Greek as Idumeans. Herod the Great’s (Matthew 2) family came from Idumean stock.

Your ticket for the: Biblical Israel: Edom