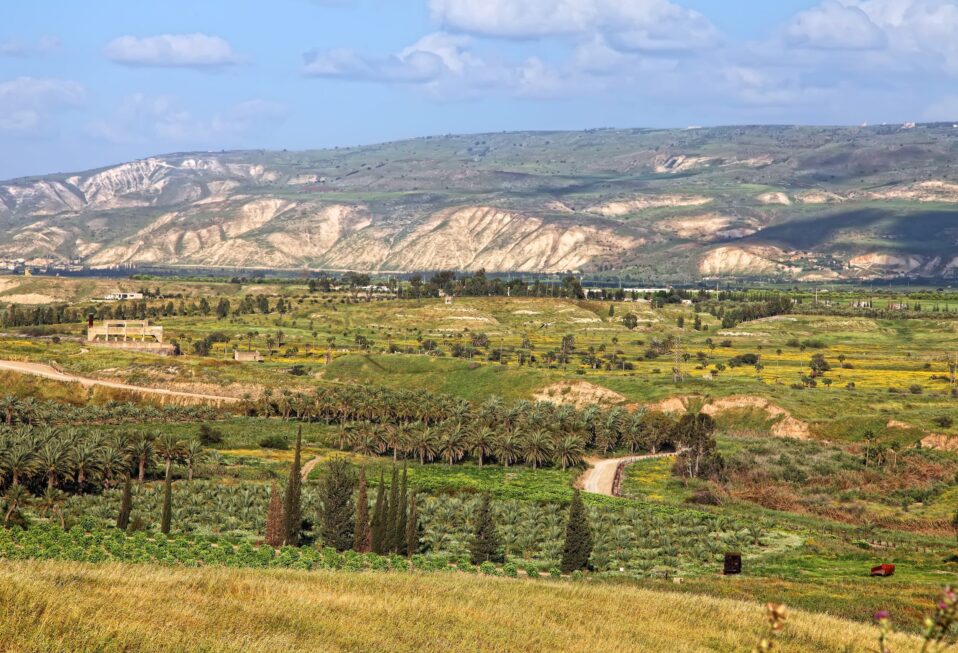 The Jordan Valley is a narrow valley the extends from the Sea of Galilee in the north to the Dead Sea in the south. It is part of the great Syro-African Rift, the longest scar on the face of the planet, that spans from Syria to Lake Victoria in Africa.

The southern stretch of the Jordan River as it exits the Sea of Galilee passes through this valley on its way to the Dead Sea. From the southern end of the Sea of Galilee to the northern shore of the Dead Sea is roughly sixty miles, yet over these sixty miles, the Jordan River meanders a little over two hundred miles. Today, the Jordan Valley serves as the international boundary between the Hashemite Kingdom of Jordan, the State of Israel, and the West Bank.

The Jordan Valley served as an interior travel route between the hill country of Cisjordan (west of the Jordan River) and Transjordan. It enabled east-west travel between these two regions, as well as north-south travel through the valley. In the first century, the Jordan Valley served as one of the three routes Galilean pilgrims could take to Jerusalem. The Gospels record Jesus following this route on his final journey to Jerusalem (Luke 19:1-11).

The northern stretch of the valley, from the Sea of Galilee until south of Beth-Shean, received good rainfall, and therefore, had rich agriculture. South of Beth-Shean towards the Dead Sea, the high mountains of Samaria restrict rainfall and the climate becomes harsh, dry, and unfriendly. Along the Jordan River, however, vegetation grows and as recently as the 19th century served as the habitation for lions, among other wildlife that still live there today.

Throughout the periods of the Old and New Testament, settlement existed within the Jordan Valley. Sites like Beth-Shean, Jericho, Pella, Deir ‘Alla (biblical Succoth), and Rehov provided important administrative, religious, and commercial centers within the Jordan Valley. It served as the route between many biblical stories that involved places in Cisjordan and Transjordan.

Your ticket for the: Biblical Israel: Jordan Valley