Hanukkah in Ancient and Modern Israel: “A Great Miracle Happened There” 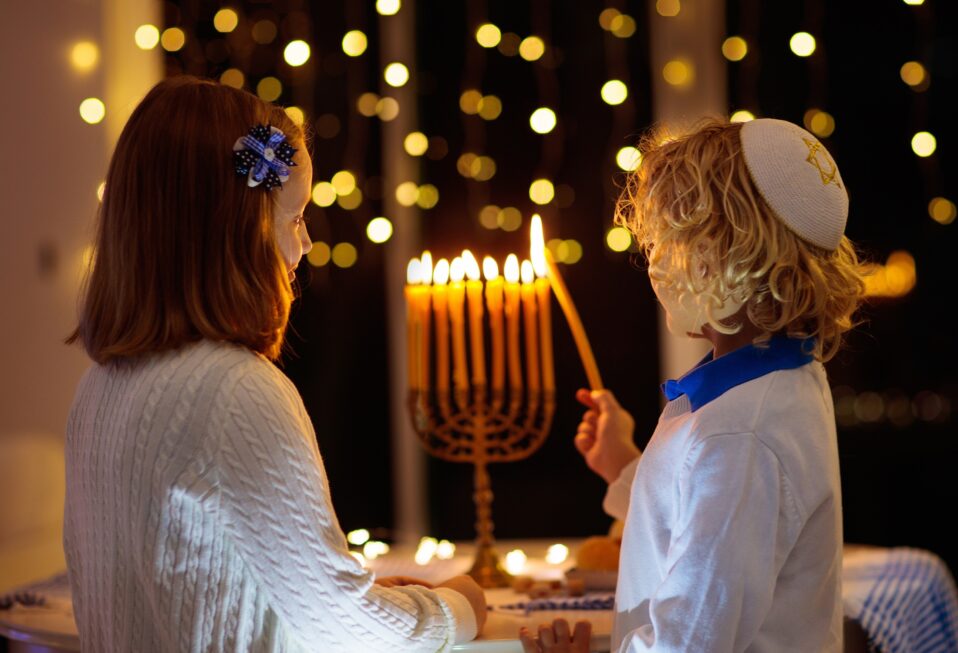 On Sunday, November 28, Jewish families worldwide began celebrating Hanukkah—lighting up their homes each day with candles in their Hanukkiahs, their menorah candelabras. By December 6, when the festival ends, all the candles will be glowing. Children are enjoying eight days of gifts and playing dreidel games, and families are feasting on jelly doughnuts and tasty latkes, the traditional potato pancakes fried in oil.

In recent years, Christians have grown increasingly familiar with the rich Jewish history of festivals and customs. We have joined in the celebration, too, as it also has a special meaning for us. The contemporary Hanukkah (dedication in Hebrew) menorah usually has nine candles, with the center called the servant or helper candle. The servant candle is used each night to light another candle until all are ablaze on the eighth day. In the Christian faith, the servant candle represents our Lord Jesus.

Our Jewish Jesus celebrated the Festival of Lights, as mentioned in John 10:22-23. It is the only passage in the Bible that refers to Hanukkah, then called the Feast of Dedication. It is not considered a major festival like Passover, Shavuot, or Feast of Tabernacles, yet it signifies the victory of the Maccabees as another eventful part of survival in Jewish history.

The apocryphal books, Maccabees I and II, contain the stories of their victory, and for us, the New Testament verifies the fact that Jesus joined in the festivities. The Maccabees rose up in 167 BCE to overthrow their enemy Antiochus IV, the Syrian-Greek (Seleucid) ruler. In addition to outlawing important Judaic practice and laws, Antiochus ordered the desecration of the Second Temple—building an altar to the pagan god, Zeus, and sacrificing  pigs. The ancient battle and the Maccabees’ victory in 164 BCE signified once again God’s intervention to save the Jewish people and their faith from extinction.

The Maccabees (also known as the Hasmoneans) then began the process of cleansing the Temple and searching for the pure oil to relight the candles. In doing so, they discovered the seven-branched golden lampstand as described in Exodus 25:31-40, when God gave Moses a detailed design at Mount Sinai to fashion the exquisite menorah. The most skilled craftsman was chosen to make it, hammering it out of a single piece of gold. It weighed perhaps a hundred pounds.

Although the Maccabees found the lampstand, they discovered only a small cruse of purified oil, enough for just one day. Nevertheless, “a miracle happened there” (Nes Gadol Hayah Sham in Hebrew), as Jews for centuries have repeatedly declared. The Maccabees decided to use the small cruse of oil. However, they must have been astonished that it lasted eight days!

According to biblical laws, the oil used in the Temple took a week to make. It involved beating (not the customary pressing) of the olives, then letting them sit so the pure oil would naturally drain. The Jews regarded the Temple menorah candlelight as the presence of God, just as during the days of the Tabernacle in the wilderness. Thus, the eight-day Festival of Lights was born.

In John 8:12 Jesus declared, “I am the light of the world. Whoever follows me will not walk in darkness, but will have the light of life.”

It is not clear to me, but I like to think Jesus proclaimed Himself as the Light of the world during the Festival itself. However, what He revealed in John 10:22-23 stunned His questioners. Christians today believe the assurances He made then: that He is our Shepherd Who protects us, walks with us, and gives us eternal life.

“Then came the Festival of Dedication at Jerusalem. It was winter, and Jesus was in the temple courts walking in Solomon’s Colonnade. The Jews who were there gathered around him, saying, ‘How long will you keep us in suspense? If you are the Messiah, tell us plainly.’ Jesus answered, ‘I did tell you, but you do not believe. The works I do in my Father’s name testify about me, but you do not believe because you are not my sheep. My sheep listen to my voice; I know them, and they follow me. I give them eternal life, and they shall never perish; no one will snatch them out of my hand. My Father, who has given them to me, is greater than all; no one can snatch them out of my Father’s hand. I and the Father are one’” (John 10:22-30).

Jesus’ bold statements offered hope to many Jews in the Temple on that day. Like the disciples, thousands of Jews believed in Jesus as their hoped-for Messiah. Yet the Romans now acted as their oppressors following in the footsteps of Antiochus IV a hundred years earlier. Nonetheless, the Jewish political and religious leaders in power took His words as blasphemy, adding more reasons to silence Him, especially when Jesus proclaimed, “I and the Father are one.”

The Festival of Lights is an opportune time to reflect on the Jewish community worldwide, from ancient to modern times—people who have experienced their share of the darkest of days. That’s because we know the God of Abraham, Isaac, and Jacob has provided the promised light to maintain His covenants with His Jewish people, their survival, and now the modern Jewish state in their ancestral homeland.

The menorah has long been an iconic symbol that abounds all over Israel, appearing in ancient mosaics and on contemporary coins. It was no mistake that Israel’s Provisional Council of State on February 10, 1949 (11 Shevat 5709), adopted the menorah as its national emblem. They held a contest in 1948 won by brothers Gabriel and Maxim Shamir. The Shamirs’ seven-branched candelabrum is depicted on a deep blue shield, with two olive branches appearing on each side in white and the country name Israel written in Hebrew (יִשְׂרָאֵל) below the menorah. The Knesset Menorah, a bold bronze sculpture created in 1956 by Benno Elkan, stands next to Israel’s parliament building at 14 feet high and weighing four tons!

Since Israel became a modern state on May 14, 1948, Israelis proclaim Happy Hanukkah with the Hebrew greeting, “nes gadol haya po,” which means “a great miracle happened here.” We agree—and wish all our Jewish friends everlasting light, today and forever.

Please join CBN Israel in prayer for Israel and the Jewish people during this Hanukkah:

May we reflect upon these words about Jesus: “The people living in darkness have seen a great light; on those living in the land of the shadow of death a light has dawned” (Matthew 4:16).

Your ticket for the: Hanukkah in Ancient and Modern Israel: “A Great Miracle Happened There”

Hanukkah in Ancient and Modern Israel: “A Great Miracle Happened There”