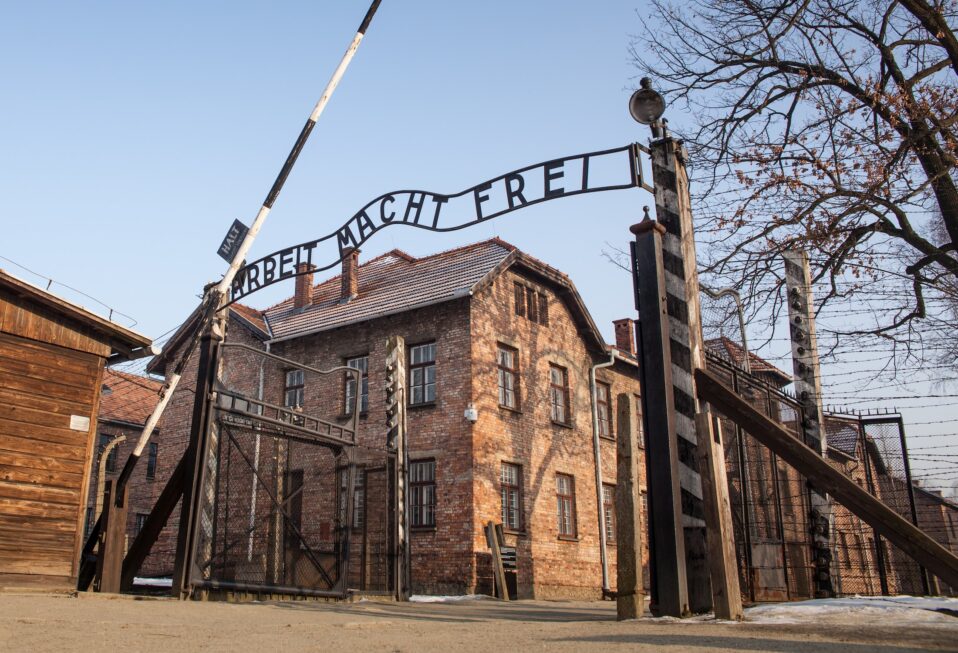 Today, January 27, is International Holocaust Remembrance Day. Amid the worldwide resurgence of anti-Semitism, recommitting to the rallying cry of “Never Again” is vital. The venom of hatred is once again poisoning the world against the Jews, God’s chosen people. Simply remembering the Holocaust is not enough.

We cannot imitate many within the European Christian community, which in large part ignored what was happening all around them. From 1942 to 1944, trains inhumanely jammed with Jewish families rumbled through Germany, Poland, and other nations while Christians attended church and sang hymns.

Auschwitz-Birkenau death camps were among the most notorious. The United States Holocaust Memorial Museum describes the breadth of the horror: “Beginning in late winter 1943, trains arrived at Auschwitz-Birkenau on a regular basis carrying Jews from virtually every German-occupied country of Europe—from as far north as Norway to the Greek island of Rhodes off the coast of Turkey in the south, from the French slopes of the Pyrenees in the west to the easternmost reaches of German-occupied Poland and the Baltic states. … The Germans killed nearly three million Jews in the five killing centers.” The Jewish Telegraphic Agency headlined this article in a Swedish newspaper: “10,000 Jews Deported from Germany to Poland in One Week.”

Thankfully, some Jews escaped transport to the death camps. A remarkable story was hidden for years about Bulgaria, a nation that was occupied by Nazis in World War II. Michael Bar-Zohar—a Bulgarian Jew who immigrated to Israel in 1948 and later served as a Knesset member—shared this astounding story in his 1998 book, Beyond Hitler’s Grasp. After World War II, when the Soviet Union took over Bulgaria, its communist leaders buried this 1943 story. Finally, when the Iron Curtain opened in 1990, tales of Bulgarian heroism began to emerge in their new era of freedom.

This particular narrative is both complex and fascinating. In 1941, Bulgaria’s King Boris III aligned with Germany. Then in early February 1943, an agreement took place between a Nazi official in Sofia—Bulgaria’s capital—and the Bulgarian Commissar for Jewish Questions. Their signatures set in motion a secret plan to deport Jews to Poland. Without warning, Bulgarian police arrested 11,343 Thracian and Macedonian Jews and took them to the border, where Nazis forced them onto the long, horrific train ride. All perished in Treblinka.

Soon after, another part of the plan became known via covert information that reached several Bulgarian legislators and religious leaders. Dimiter Peshev, Deputy President of the National Assembly, had already realized with horror his part in allowing the deportation of the Thracian and Macedonian Jews. Peshev sprang into action, as arrests were already in progress and they were just three days away from loading Jews onto the trains. Peshev and the Bulgarian Eastern Orthodox Church’s Archbishop Stefan of Sofia galvanized the people in the capital, Sofia—creating a fire of determined peaceful resistance that lit Bulgarian hearts at all levels of society.

Bulgaria’s national motto, “Unity Makes Strength,” symbolized that nation’s long history of diversity and harmony with its Jewish citizens. Together, Bulgaria’s citizens would help ensure freedom for its Jewish population. Although some Bulgarian Jews were put in work camps in Bulgaria, they weren’t deported to extermination camps.

There were myriad examples of Bulgarian bravery. Bishop Kiril of the Bulgarian Orthodox Church led 300 of his church members to defy Nazis by standing in front of a train filled with Jewish men, women, and children in the town of Plovdiv. Bulgarians washed away hateful slogans painted by Nazis. A teacher publicly wore a yellow star to stand up for her Jewish friends, and a baker hid Jews in his bakery oven.

Three Nazi deportation attempts were made. All three failed, and the trains left empty. Bulgaria saved its 49,000 Jewish citizens. It was the largest rescue in Nazi-occupied Europe, yet it remained mostly hidden from historical accounts until the Soviet Union dissolved. It earned Bulgaria the distinction of being the only Axis-aligned country that didn’t deport its Jews.

Today, the actions of Bulgaria’s brave citizens can remind us to set aside apathy and denial and express in word and deed our commitment to the Jews of Israel, America, and worldwide. For Jewish and Christian communities that want to actively prevent anti-Semitism’s malignant growth, so many choices are available.

Among these choices, cultural and artistic renditions of Holocaust-era stories can inspire us to act today. There are three I especially want to highlight: Varna International, Israel’s Violins of Hope, and The Auschwitz Album Revisited art exhibit. A dedicated group composed of Jews and Christians have organized a four-week concert tour across South Carolina beginning April 24. They and The Jerusalem Connection Report share one goal: to educate audiences—through music and the art exhibit—with inspiring stories of honor and heroism to renew the “Never Again” message.

When husband-wife team Kalin and Sharon Tchonev founded Varna International 21 years ago in Columbia, South Carolina, they had no idea their company would bloom into a globally recognized festival organizer. Specializing in large-scale, artistically rich, and customized choral-orchestral concerts throughout Europe, Israel, and the United States, they have staged performances at The Kennedy Center, Lincoln Center, and hundreds of other esteemed venues.

Inspired by the Bulgarian people who rescued their Jewish population from certain death, Kalin and Sharon Tchonev conceived the “Songs of Life” festival. It is their personal love story. Kalin explains, “Had it not been for the miraculous rescue of Bulgaria’s Jews, I (a Bulgarian) would not have my wife and son today. Sharon’s maternal grandparents were among the 49,000 Bulgarian Jews rescued during the Holocaust.” In 1950, her grandparents immigrated to Israel, where Sharon was born.

Israel’s Violins of Hope embodies the victory of the human spirit over evil and hatred. Famous luthiers Amnon Weinstein and his son Avshi have restored 60 violins in their Tel Aviv workshop since Amnon founded Violins of Hope in 1996. Amnon has collected instruments since the end of World War II—instruments belonging to Jews before and during the war. Violins were donated or bought from survivors; some came through family members. Although Amnon’s parents escaped the Holocaust by making Aliyah from Poland to what was then the British Mandate of Palestine in 1935, many other members of his family were later murdered in World War II. As their website explains, Violins of Hope is a “project of concerts based on the collection … not only a memorial to lost culture and people, it is also an educational act that reaches young students and adults wherever our concerts are performed.”

The final prong of this educational tour is an art exhibit called The Auschwitz Album Revisited. Christian artist Dr. Pat Mercer Hutchens (1937-2014) expertly recreated oil paintings in color from 40 black-and-white photos in a Nazi album. An  Auschwitz survivor discovered the album  when it was liberated in 1945. The artist finished the project despite suffering with cancer. Her art is permanently exhibited at the Liberty University art gallery in Lynchburg, Virginia.

The Jerusalem Connection Report joins in to honor the lost and educate the living with the art exhibit in several music locations on the tour.

Over the four-week period starting in April, hundreds of South Carolina musicians and choirs will present Holocaust Remembrance Stories (violinsofhopesc.org/events-tickets).

I pray that all Christians will make choices to stand against rising anti-Semitism. We can’t all be a Corrie ten Boom or an Oskar Schindler, but many avenues for offering help exist today. Patronizing concerts and art shows and making donations to humanitarian aid for Holocaust survivors. Supporting the production of films and documentaries by CBN Israel. Refusing to participate in slanderous Jewish jokes. Passing on facts in emails and social media. Inviting a Jewish friend to dinner or an expert to speak in your church or attending a synagogue.

Today, may we solemnly reflect upon the weighty words of Martin Luther King Jr., who said, “In the end, we will remember not the words of our enemies, but the silence of our friends.”

Your ticket for the: On International Holocaust Remembrance Day, a Little-Known Story Offers Inspiration