The Perfect Lamb Crushed in Gethsemane 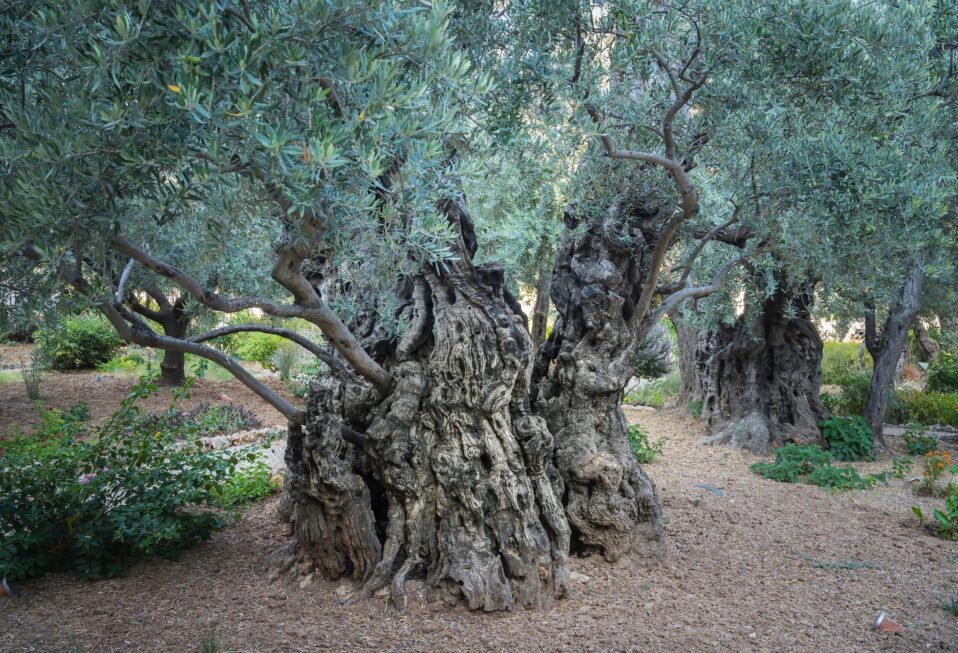 When Jesus, the Perfect Lamb of God, rode into Jerusalem at the age of 33, He was about to experience His last Passover on earth. He had arrived in Jerusalem on lamb selection day, when thousands of lambs were chosen for the Temple sacrifices. Multitudes of His followers filled the air with joyful shouts on the Day of Lambs—Palm Sunday. Jesus attended Passover each year, along with Jews traveling from all over the known world for the most significant Jewish festival.

The initial outpouring of ecstatic shouts eventually shifted into disappointment among many Jews, who hoped for a secular king riding in on a stallion—a symbol of overthrowing their Roman oppressors. Instead, Jesus rode a humble donkey, symbolizing a servant-king. Along with waving their palm and olive branches, the crowds may have wished for regal banners and guards leading the way ahead of Jesus.

Dramatic events swiftly moved forward. Walking the Pilgrim Road up to the Temple on lamb selection day, Jesus shocked everyone by angrily overturning the moneychangers’ tables in the Temple, accusing them of turning that house of prayer into “a den of thieves” (Matthew 21:12-13).

Later in the week, Jesus and His disciples assembled in the Upper Room for Passover (in Hebrew, Chag Ha-Matzot), the feast of freedom. However, freedom was not Jesus’ destiny that night. His destiny was embodied, literally, as the substitute for our sins, which through His shed blood guaranteed our freedom instead. Along with His profound sermon in John 17, Jesus performed another surprising act that week: The King of Kings humbly knelt to wash the feet of His disciples and instructed them to serve others.

How must Judas have felt that night, his feet washed by His Savior, already having been paid off with silver to betray Him. Their conversation unfolded this way in John 13:21-28 (HCSB):

“When Jesus had said this, He was troubled in His spirit and testified, ‘I assure you: One of you will betray Me!’ The disciples started looking at one another—uncertain which one He was speaking about. One of His disciples, the one Jesus loved, was reclining close beside Jesus. Simon Peter motioned to him to find out who it was He was talking about. So he leaned back against Jesus and asked Him, ‘Lord, who is it?’ Jesus replied, ‘He’s the one I give the piece of bread to after I have dipped it.’ When He had dipped the bread, He gave it to Judas, Simon Iscariot’s son. After Judas ate the piece of bread, Satan entered him. Therefore Jesus told him, ‘What you’re doing, do quickly.’ None of those reclining at the table knew why He told him this.”

And in John 18:3, we’re told that Judas slipped out of the Upper Room and met up with those carrying torches to the garden of Gethsemane.

Jesus and His remaining disciples—now numbering 11—also departed from the Upper Room. The disciples must have been puzzled, nervous, even angry when Judas left. The day had already proved different from any other in the three years they had been with their Rabbi. In the darkness the group walked about a mile to the Mount of Olives, familiar to all Jerusalemites as it was an important manufacturing area that produced valuable olive oil. At the foot of the Mount of Olives, they arrived at Gethsemane. The English word “Gethsemane” combines two Hebrew words, Gat and Shmanim, and is defined as “the place where olive oil is pressed”—the “Garden of the Olive Press.”

The geographic location of Gethsemane is rich with symbolism. Knowing the mechanics of olive presses makes it easier to visualize why Jesus led His disciples to that specific spot for prayer before His arrest.

During Roman rule, olive presses numbered in the thousands—in groves scattered all over Israel and the Roman Empire. Large and small presses made of stone crushed the harvested fruit. The larger presses included stones suspended with ropes from wooden crossbeams—stones that weighed up to a ton. The pulp eventually underwent enough crushing that the precious commodity could be emptied into clay jars. The refined oil was used in cooking, anointing oil, and Temple lights.

In Isaiah 53:5 (NKJV) we read this compelling verse, “But He was wounded for our transgressions, He was bruised for our iniquities; the chastisement for our peace was upon Him, and by His stripes we are healed.” Like the wooden beams holding the stones on the olive presses, our Savior Jesus bore the wooden beams of the crucifixion tree crushed under the incalculable weight of our sins.

In the Garden of the Olive Press, Jesus cried out: “Father, all things are possible for You. Take this cup away from Me; nevertheless, not what I will, but what You will” (Mark 14:36 NKJV). The Christian community is well versed in the fact that Jesus prayed in anguish and wept tears of blood prior to his arrest. Although one might wonder if sweating blood is an exaggeration, it is true. In fact, Hematidrosis is the medical term for the rare occurrence where blood is mixed in sweat. It happens in extreme situations where someone is facing death or another incredibly stressful event. And Jesus faced anguish, a burden that only one person in the history of the world confronted. On the cross, His death and sacrificial blood was for all people for all time. Untold billions of sin burdens crushed Jesus.

The olive press in Gethsemane represented physical symbols of the crushing emotions Jesus experienced as Hematidrosis took place in His body. Crushing is the method of getting what is most valuable, the oil, out of the olive. Jesus’ emotional crushing in the garden of olive presses produced the precious oil and blood of our redemption.

Eventually, after three periods of praying in the Garden—and His disciples unable to stay awake despite their Master’s admonition to do so—Jesus announced, “Here comes my betrayer.” Judas Iscariot led a mob armed with clubs and swords dispatched by the power structure, the Chief Priests, teachers of the law, and the elders. After Judas had placed the kiss of death on Jesus’ face, the arrest, interrogation, mocking, and abuse went operational. Later Judas committed suicide.

Following Jesus from the Garden of the Olive Press into the traumatic, violent night, it is essential to recall what He said to the Pharisees: “Therefore My Father loves Me, because I lay down My life that I may take it again. No one takes it from Me, but I lay it down of Myself. I have power to lay it down, and I have power to take it again. This command I have received from My Father” (John 10:17-18 NKJV).

Jesus was willing to be crushed and to pour out the pure oil of His life on the cross to redeem mankind. No one could stop God’s redemptive plan! Not the Jews, not the Romans who carried out the death sentence.

When Roman soldiers hammered spikes into Jesus’ body, Temple priests had spent untold hours slaughtering the Bethlehem lambs by the thousands. Priests threw lambs’ blood all over the Temple court. Expertly wielding their knives, the priests chanted the Hallel Psalms (113–118). Maybe Jesus could hear snippets of the chants where He hung outside Jerusalem’s walls.

When the skinning, bloodletting, then roasting of lambs for food began, the priests hung the lambs on wooden hooks stretching out their front legs onto a crossbar in the shape of a cross. Jesus hung on the cross, thus removing the need for thousands upon thousands of lambs dying on a conveyor belt of killing and hanging.

God’s Perfect Lamb perfected John 3:16: “For God so loved the world that He gave His one and only Son, that whoever believes in Him shall not perish but have eternal life.”

Knowing more about Gethsemane and Jesus’ identification with the olive presses, let us rejoice that Jesus freed us from sin’s grip, crushed for us!

Join CBN Israel in prayer this week, thanking Jesus for being the Lamb of God who takes away the sin of the world (John 1:29):

As we approach Good Friday and Easter, may we reflect upon these words of the Apostle Peter: “He did not commit sin, and no deceit was found in His mouth; when He was reviled, He did not revile in return; when He was suffering, He did not threaten but entrusted Himself to the One who judges justly. He Himself bore our sins in His body on the tree, so that, having died to sins, we might live for righteousness; you have been healed by His wounds. For you were like sheep going astray, but you have now returned to the Shepherd and Guardian of your souls” (1 Peter 2:22-25 HCSB).

Your ticket for the: The Perfect Lamb Crushed in Gethsemane

The Perfect Lamb Crushed in Gethsemane