The Torn Veil: Why Christians Care About the Temple Mount 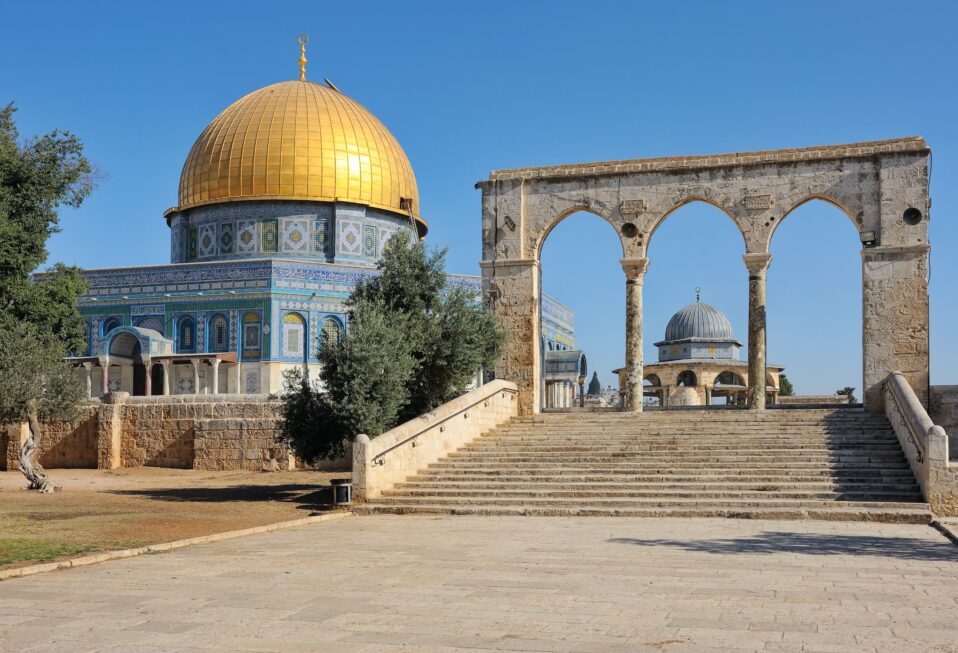 Joyful Christian tourists once again arrived in Israel for this year’s Holy Week observances after two years of Israel’s strict COVID-19 lockdown policies had kept them away.

Tour itineraries always include Israel’s capital, Jerusalem. Although visits to the city’s Temple Mount are sparse because of too few visiting hours and too many restrictions, the 36-acre compound is treasured among Bible-focused believers. The Temple Mount is the holiest site in Judaism, yet it is under the authority of the Jordanian Waqf Foundation.

Here’s how that came about: After Israel unified Jerusalem following its victory in the Six-Day War, in a gesture of religious tolerance the Israelis decided to allow the Waqf to continue as the site’s administrative body. Today the Waqf, combined with rabbinical law—which is also restrictive toward Jews—can make walking around the Mount more than a bit strained. On one of my visits to the Temple Mount with a friend, we were followed by a Palestinian “minder.” Neither Christians nor Jews are allowed to pray there. Our minder often shook his finger in an accusing way, although we were dressed appropriately and doing nothing wrong. The atmosphere was tense and felt somewhat sterile.

Regardless, biblical narratives and historical facts keep the Temple Mount as a true treasure of the Jewish faith.

Some may wonder why Christians would care about visiting the Temple Mount when it can be such a turbulent spot. In fact, the Temple Mount is often referred to as “ground zero” in the religious and territorial conflict between Israelis and their Arab neighbors. And, as the holy site for the three major monotheistic faiths, there are so many possibilities for clashes and offenses to various sensibilities. Often, this 36-acre landscape of holy sites is vulnerable to a mere word, a visit, or a mindset of hatred that erupts into a blaze of violence. This year it’s especially volatile because, in a rare convergence of the three monotheistic faiths, their celebrations are now taking place at virtually the same time this year: Holy Week for Christians, Passover for Jews, and Ramadan for Muslims. Unfortunately, what is not rare is the violence that breaks out on and around the Temple Mount.

Violence erupted once again just last week on April 15, which was the first day of Passover and the Christian observance of Good Friday. Following Muslim prayers at dawn, several hundred young Palestinian men launched a rock-throwing campaign against Israeli police, whose job is to keep the peace on the Temple Mount. Waiting until Muslim prayers ended, Israeli police entered the al-Aqsa Mosque and arrested 470 men to quell the violence.

Many of the global mainstream media ignored how the violence flared up. Nevertheless, the Committee for Accuracy in Middle East Reporting and Analysis describes the facts: “Around 4 a.m. on Friday morning, dozens of Palestinians began marching around al-Aqsa Mosque (some carrying banners associated with Hamas), started breaking stones and then throwing them at police and Jewish worshipers at the Western Wall below—while stockpiling more rocks at the mosque to prepare for further attacks. Palestinians later barricaded themselves inside the mosque and hurled stones and fireworks toward officers. The violence prevented large numbers of Muslims from worshiping at al-Aqsa.”

Christians living outside Israel may not easily comprehend the trauma of terrorism. Yet violence on the Temple Mount or any part of Israel is of deep concern. And hopefully, my thoughts will help explain our reverence for the Temple Mount and its surroundings.

Because Jesus was born into a Jewish culture, we know He grew up celebrating major Jewish feasts—Passover, Pentecost, and Tabernacles (Pesach, Shavuot, and Sukkot). Luke records a fascinating encounter in chapter 2, verses 41-47. In the Temple, when Jesus was 12 years old, He and the Jewish scholars engaged in theological discussions for three days that “astonished” the learned men. I have often wondered if this was a version of Jesus becoming bar mitzvahed, where young men read from Torah publicly for the first time at 12 or 13 years old.

Whether believers visiting Israel walk on the Pilgrim Road or sit on the southern steps that led up to the Temple, the realization that our Jewish Savior walked countless thousands of footsteps in Jerusalem is profoundly meaningful.

Two different Temples stood on the Temple Mount. King Nebuchadnezzar destroyed Solomon’s Temple in 586 B.C. The Romans destroyed the Second Temple in A.D. 70, and Muslims built their sites on the grounds some 600 years later. History does not reveal that a church ever stood on the Temple Mount. However, Jesus’ teaching, walking, and healing makes the area a sacred location for those of us who follow and worship Him. Remembering what happened on the day of His crucifixion, though, is the most powerful magnet drawing Christians to the Temple Mount.

In a physical feat only the mighty Hands of God could achieve, He tore in two the purple, scarlet, and blue veil/curtain (parochet) in the Temple when the Perfect Passover Lamb breathed His last breath on the tree. Luke 23:44-45 relates, “It was now about the sixth hour, and darkness came over the whole land until the ninth hour, for the sun stopped shining. And the curtain of the temple was torn in two.”

It is easy to imagine the priests’ terror when they saw the curtain rent in two. It was incomprehensible. Yet when God tore the veil in two, He welcomed us into the Holy of Holies through the blood of His Perfect Lamb so that we could step inside to fellowship with Him, both Gentile and Jew! Jesus’ substitutionary death for us, and God Himself tearing the veil, meant that we were no longer separated.

The physical rending of the curtain was certainly spectacular, and the result is eternal. Our repentance—recognizing His sacrifice and inviting the Lord Jesus to come into our hearts—bridged the impassable gap between Holy God the Father and us.

We are familiar with Jesus’ last words on the Cross: “It is finished.” The Greek word tetelestai supplies more insights, meaning as it does “to end, to pay or discharge,” as in a debt. In ancient times, tetelestai was stamped or written on important documents in the New Testament era to show that a bill had been paid in full.

On a hill outside Jerusalem’s walls, Jesus proclaimed, “It is finished.” His death on the cross coincided with God the Father tearing the veil on the Temple Mount opening the Holy of Holies. Jesus paid our sin debts in full. He took our place.

Somewhere atop the Temple Mount, the Second Temple stood. The magnificent veil was torn from top to bottom. And we know our risen Lord will one day return!

Your ticket for the: The Torn Veil: Why Christians Care About the Temple Mount

The Torn Veil: Why Christians Care About the Temple Mount