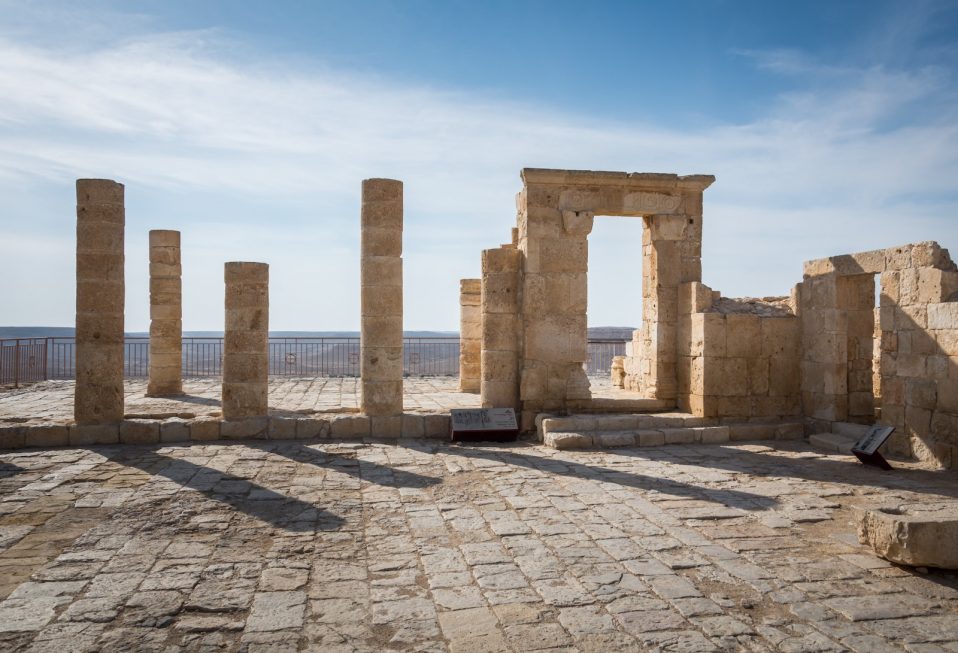 Located in the modern Negev Desert on the spur of a mountain ridge, overlooking the plain around the canyon of En Avdat (the “Spring of Avdat”), sits the ancient ruins of the Nabatean city of Avdat. Avdat sits along the ancient caravan routes that crossed the barren lands from Elat (ancient Aila) on the Gulf of Aqaba, and Petra, the Nabatean capital in the Transjordan, to the Mediterranean coast and the port city of Gaza.

The Nabateans, a nomadic people, immigrated out of the Arabian Peninsula, and in the period of the New Testament, their kingdom stretched from southern Syria to the northern Hijaz in the Arabian Peninsula. Their capital was Petra, in the south of the modern Kingdom of Jordan. Although the land of their kingdom was vast, they had few urban centers. They controlled the trade and caravan routes through the Transjordan, including those that extended west to the Mediterranean coast. Their ability to travel through the dry desert regions, in part by using their caravansaries, like Avdat, enabled them to acquire a great degree of wealth.

In the New Testament, Herod Antipas, who beheaded John the Baptist, was originally married to a Nabatean princess, the daughter of the Nabatean king Aretas IV. He divorced her in order to marry Herodias, the wife of his brother with whom he had an adulterous affair (Luke 3:19-20).

The Roman annexation of the Nabatean kingdom into Provincia Arabia in A.D. 106 did not hurt Avdat. In fact, the second and third centuries A.D. saw the site flourish, as both agriculture and herding became part of the local economy. With the rise of Christianity in the fourth century A.D., two churches and a monastery were built on the site replacing the pagan shrines. Avdat relied upon the cultivation and production of a fine variety of grapes and wine during the Byzantine period. The site was abandoned in A.D. 636 with the Arab conquest.

The earliest periods of settlement left little in terms of remains, especially a lack of architectural remains. Coins and imported pottery provide the main discoveries on the site from the fourth century B.C. to the early first century B.C. During the first century, public buildings were erected on the site including a shrine (temple) where the Nabatean pantheon were worshipped.

Although not mentioned in the New Testament, Avdat and the Nabateans stood on the edge of the New Testament world. Herod the Great’s mother likely belonged to the Nabatean aristocracy, if not the royal family. We already mentioned the wife of Antipas. Throughout the first century, the Herodian lands came into conflict with Nabatean territory, which sets the backdrop for life in the region.

Your ticket for the: Biblical Israel: Avdat