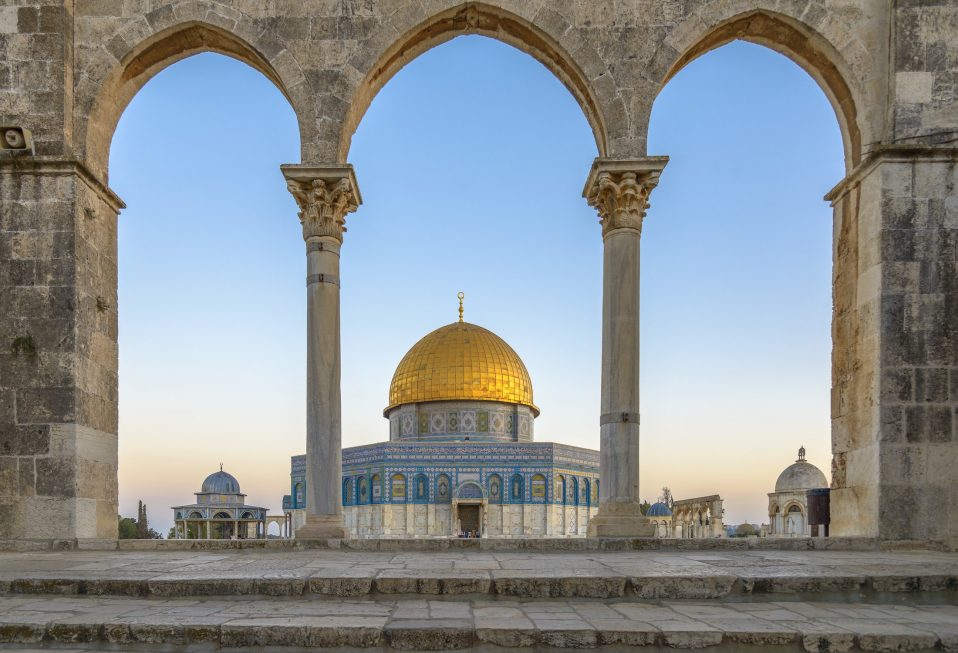 The Golden Dome of the Rock provides one of the most iconic and recognizable images of any city’s skyline within the world. The Islamic shrine completed in A.D. 692 by the Umayyad Caliph Abd al-Malik stands upon the platform of the Temple Mount, which was constructed during the first centuries B.C. and A.D. The Temple Mount refers to the platform and complex upon which stood the Temple constructed by Herod the Great. This was the Temple known to Jesus, Mary, Joseph, Peter, and Paul. It stood on the northern end of the eastern hill of Jerusalem, what the Bible calls Mount Zion.

Around 1000 B.C., David conquered the Jebusite city of Jerusalem and the stronghold of Zion, which sat on the eastern hill. He made this the capital of his united kingdom, Israel. When his son, Solomon, succeeded his father as king, he extended the city to the northern height of the eastern hill where he built his palace, administrative buildings, and the House of the God of Israel, the First Temple. This building remained situated on the height of the eastern hill until the Babylonians, under Nebuchadnezzar, destroyed it in 586 B.C. The Babylonians carried the Judeans into exile. When they returned to the land around Jerusalem, they rebuilt the Temple, under Zerubbabel. This building underwent renovations and additions in the subsequent centuries; however, our knowledge of this is limited due to the absence of clear descriptions within ancient sources and a lack of archaeological excavation in the area of the Temple Mount.

In the eighteenth year of Herod the Great’s reign as king of Judea, he began a massive remodeling and reconstruction of the Temple area, which ultimately resulted in the construction of the Temple Mount. The construction, which continued into the first century A.D., after Herod’s death in 4 B.C., created a series of four retaining walls that supported the platform, which covered the high point of the eastern hill turning it into the largest enclosed sacred space within the Roman world. The main portion of construction took nine-and-a-half years. Herod apparently oversaw the building of the Temple building, which stood twice the height of the golden Dome of the Rock, and the remodeling of the sacred precincts, an area of five hundred cubits square, during his lifetime.

The heart of the Temple Mount was the Temple building and the surrounding sacred complex, which including the Court of the Women, the Court of the Israelites, the Chambers of Wood, Oil, Lepers, and Nazirites. Inside the Temple building was the Holy Place, which housed the golden lampstand (the menorah), the Table of Shewbread, and the altar of incense. Beyond the Holy Place was the Holies of Holies, which was entered only by the high priest once a year on the Day of Atonement.

The present eastern gate, known as the Golden Gate (or in Arabic, the Mercy Gate) was built much later than the first century. It was sealed, like most of the gates onto the Temple Mount by the Crusader, Knights Templar, who made the Temple Mount their headquarters. The western retaining wall had four gates. Two were upper and two lower, and they alternated lower and upper. The northernmost gate opened onto a street that ran alongside the western retaining wall. Today it is known as Warren’s Gate (named after the British explorer, Charles Warren, who found the gate).

In the first century an arched bridge spanned from the western hill to the western wall of the Temple Mount. This bridge conveyed an aqueduct that provided water for the Temple worship. The bridge and the arched gateway that provided access onto the Temple Mount were identified by Charles Wilson in the nineteenth century and bear his name today. Today a portion of the western retaining wall serves as the prayer plaza of the Western Wall, a functioning synagogue, a site holy for Jews. In the women’s section of the Western Wall remains of a third gate can be seen. This gate, known as Barclay’s gate, after the American missionary, James Barclay, who discovered it, also provided access to the street that ran along the western wall.

The fourth and final gate also offered another elevated access onto the Temple Mount platform. It was supported by a large arch with steps that ascended the southwestern corner of the Temple Mount. The arch, which was the largest arch in the Roman world at the time of its construction, is known as Robinson’s Arch, bearing the name of the American Edward Robinson who identified the spring of the arch, which is all that remains. The southern entrances of the Temple Mount served the majority of Jewish pilgrims who came to Jerusalem for the festivals of Passover, Pentecost, and Tabernacles. Two large double gates stood at the top of stairs providing access up a ramp onto the Temple Mount platform. Pilgrims entered on the right of the two gates and exited through the left two gates unless they were in mourning. If they were in mourning, they went the opposite direction in order to receive comfort from their fellow worshipers.

The western and southern retaining walls were built in the first century A.D. Their construction enlarged the Temple Mount platform to the south, which created a large court outside of the sacred precincts. They also supported a large colonnaded structure that stood on the southern end of the Temple Mount known as the Royal Stoa.

Your ticket for the: Biblical Israel: Temple Mount