Liberating Art From BDS and Lies About Israel 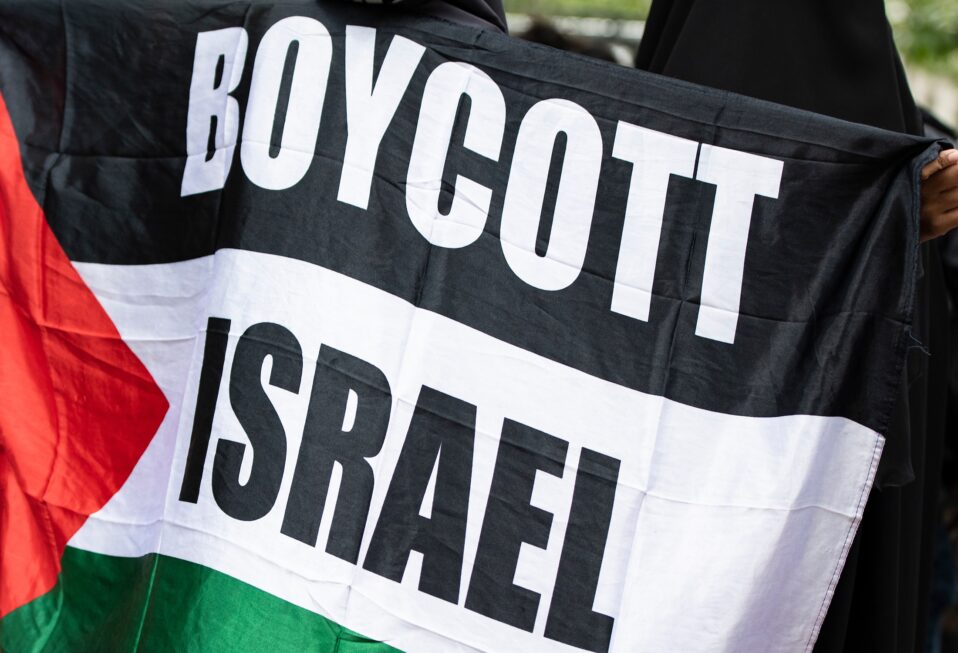 Entertainment industry insider Lana Melman is a formidable trailblazer. After two decades in executive positions at CBS, Columbia Pictures Television, Warner Brothers, and Paramount, and as a scriptwriter and executive producer, Melman turned her attention to combating a manifestation of anti-Semitism: anti-Zionism.

In 2015, she transformed her extensive contacts in Hollywood and New York City into a robust network of resistance to the Boycott, Divestment and Sanctions (BDS) movement. She founded the organization Liberate Art to equip others to understand—and then expose—the BDS movement for its cunningly obscured goal of destroying Israel by using entertainers as pawns while claiming to help Palestinians. Recently, I enjoyed an informative, delightful breakfast with Lana where I learned about her impressive background, her insights into the true motives of BDS, and what we can do to educate others about the pervasive threat it poses.

Her book, Artists Under Fire: The BDS War Against Celebrities, Jews, and Israel, belongs on the bookshelf of everyone who cares about Israel. Published in April 2022, the book takes readers behind the scenes in a fascinating yet sobering journey. Chock-full of valuable information and written in an engaging style, Artists Under Fire is well researched, as evidenced by its 27-page bibliography. However, Lana is a remarkable source in her own right, opening doors for her readers into a world of glamour and celebrity, with her personal stories about a bold and necessary movement she is leading.

Melman authored her book as an educational tool to explore the goals and tactics of BDS, and then rally others to oppose a specialized brand of anti-Semitism called the cultural boycott campaign. BDS is best known for its economic warfare: targeting companies that do business in Israel and attempting to pressure them financially into withdrawing. Fortunately, 37 states in the U.S. have already passed legislation to counteract economic warfare against Israel. However, the lesser-known cultural boycott campaign can be especially damaging, as it generates a vast social media presence based on its efforts to prevent global celebrities from giving concerts in Israel. Indeed, BDS activists also aim their protests and lies against Israeli musicians performing in international venues.

The Palestinian-led BDS and its militants seem to relish trying to cancel performances of any genre of music and the arts. Their motives are not based on peaceful protest and dialogue. They prefer threatening and intimidating celebrities who have millions of followers. In fact, adding up the follower base of 11 famous entertainers, it totals about a billion fans on one social media platform alone.

Here’s how it works: The BDS culture boycotters go into action when they learn that a concert is scheduled for Israel. The artists are “media magnets” and become victims of slander and sometimes-credible threats from BDSers who go on the hunt for entertainers. As Melman points out in her book, the threat of BDS lies in “attacking artists of all kinds and hijacking their names and likenesses to spread anti-Israel and anti-Jewish propaganda to billions of people.”

The BDS contingent uses lies wrapped in emotion and shame. Some of their favorite taglines toward celebrities are, “You will not be safe in Israel.” “If you cared about children, you would not go to Israel.” “Israel is committing Palestinian genocide.” “We will destroy your fan base.”

Rising stars often suffer the same intimidation. For example, Israel hosted the 2019 Eurovision event that drew contestants from 41 countries with a viewing audience in the hundreds of millions. BDS was busy with fearmongering, saying, “We know where you live”—trying to force contestants to withdraw. Fortunately, the artists stood firm, and no one canceled!

The BDS movement has unfortunately done a good job of harnessing the immense and far-reaching power of social media. Lies often travel faster than facts. Nevertheless, out of hundreds of bands, superstars, and comics who perform in Israel every year, only a few artists cancel their appearances there. Most choose to forge ahead—despite the BDS-devised slurs that defame them through petitions, op-eds, open letters, bots, threats, memes, and hostile protests at concerts.

One of the favorite strategies of BDS agitators is to photoshop war photos (it seems any war will do) and repurpose an artist’s popular song to accuse them of supporting Israel—which BDS falsely calls an apartheid, colonialist country that persecutes Palestinians. Using such duplicitous tactics, BDS activists are even known to pressure charities whom entertainers support in order to force concert cancellations.

Founded by Palestinian organizations in 2005, BDS has continued to expand its lies and smear campaigns, yet their efforts are mostly a failure. Thankfully, other Palestinian influencers have a wiser perspective. Khaled Abu Toameh, a highly respected award-winning Arab journalist, authored an article just last week with a title that speaks to immense despair: “Palestinians Commit Suicide as Their Leaders Live in Hotels and Villas.”

Bassem Eid, another respected Palestinian media commentator, claims nations that have signed on to the BDS agenda have become “part of the conflict rather than part of the solution.” He adds that “BDS has nothing to offer”—that it can’t find people jobs so they can earn a decent living. BDS fanatics are pushing for a world without a Jewish state—not widespread humanitarian help for Palestinians who know that corruption and hypocrisy are rampant among their leaders and who long for change.

My focus here is not on the kinds of music we prefer or reverence as evangelicals. Instead, it is a hard look into the dangerous BDS narrative against entertainers, the nation of Israel, and Israeli artists. Some of the stars I mention may not be to our liking. However, the key is to counter BDS lies with the help of the advice found in Melman’s book.

Some of the biggest stars in the world—such as the Rolling Stones, Elton John, Bono, and Paul McCartney—enjoy their enthusiastic Israeli audiences. Prior to McCartney’s 2008 concert in Tel Aviv, a radical Islamist cleric threatened the superstar: “If he values his life, Mr. McCartney must not come to Israel. He will not be safe.” Let’s applaud McCartney and others who refuse to cancel their appearances! In 2019 Jennifer Lopez tweeted, “The motherland Israel!!! First time here. I’m in love!”

Soon, Spain’s Placido Domingo and Canada’s Justin Bieber will be going to Israel, and Bieber returns in 2023 for his third trip. Others on the Israeli music circuit are Celine Dion, going in 2023, and Lionel Richie, who gave a concert in March. “My friends have been trying to convince me to come for 40 years,” Richie said. “Now I know why.” For Paul Anka, Israel is a regular stop. His most recent Las Vegas revue was in July.

Actors and influencers like Helen Mirren, Kathie Lee Gifford, Michael Douglas, and Will Smith visit the Holy Land and comment in glowing terms. After one of her trips to Israel, supermodel (now business mogul) Kathy Ireland spoke at the American Israel Public Affairs Committee (AIPAC) at their annual Policy Conference. To the thousands gathered there, she declared that  Americans and the world owe Israel “an unpayable debt.” While on AIPAC staff that year, I enjoyed meeting Kathy in person after her appearance. As a devoted Christian, she represented the Christian community so well.

For those of us in the evangelical community, we are uplifted that some of our favorite Christian artists are touring and giving concerts in Israel. Chris Tomlin led a tour and series of worship concerts in 2019 and later commented on Twitter, “Israel, you have my heart.” In 2020, Hillsong staged three concerts that Trinity Broadcast Network aired for millions of viewers. A slate of international worship artists, including Joshua Aaron, will appear during the Feast of Tabernacles in October held annually by the International Christian Embassy Jerusalem in Israel. In June 2023, Gallelujah is planning a festival of concerts in the Galilee for three days, featuring top Christian stars Brandon Lake, For King and Country, and Rebecca St. James.

It is indeed encouraging to note the numerous ongoing celebrity visits and performances. Nevertheless, social media defamation about Israel takes on a life of its own, adding layers of worldwide lies against the Jewish state. As long as such lies continue, we must meet them with truth.

Artists Under Fire is a great read, a guidebook providing practical ways our involvement can produce results by telling the truth about BDS. Everyone can help to “liberate art.” As Lana Melman suggests, keep it simple, yet take the offense to tell the truth about BDS. Don’t get bogged down in verbal wars. For your favorite artists, give a thumbs up to those who are performing in Israel. In social media, share posts that expose BDS for what it is.

Melman observes that “the cultural boycott campaign politicizes art” and degrades artists as peace ambassadors and change agents. She urges everyone to embrace the fact that “It only takes a few good men and women to make a difference. Be one of them.” In our evangelical community, we know God always trains up a remnant. Let’s redeem social media by using tools of truth, support our favorite artists, and thank the God of Abraham, Isaac, and Jacob and our Lord Jesus Christ for creating music, songs, instruments, and voices to fill our hearts with hope and praise for His unconditional love!

Join CBN Israel in prayer this week for the nation and people of Israel:

Your ticket for the: Liberating Art From BDS and Lies About Israel

Liberating Art From BDS and Lies About Israel