The Famous Ben-Yehuda Street: A Walk Into Jerusalem’s History 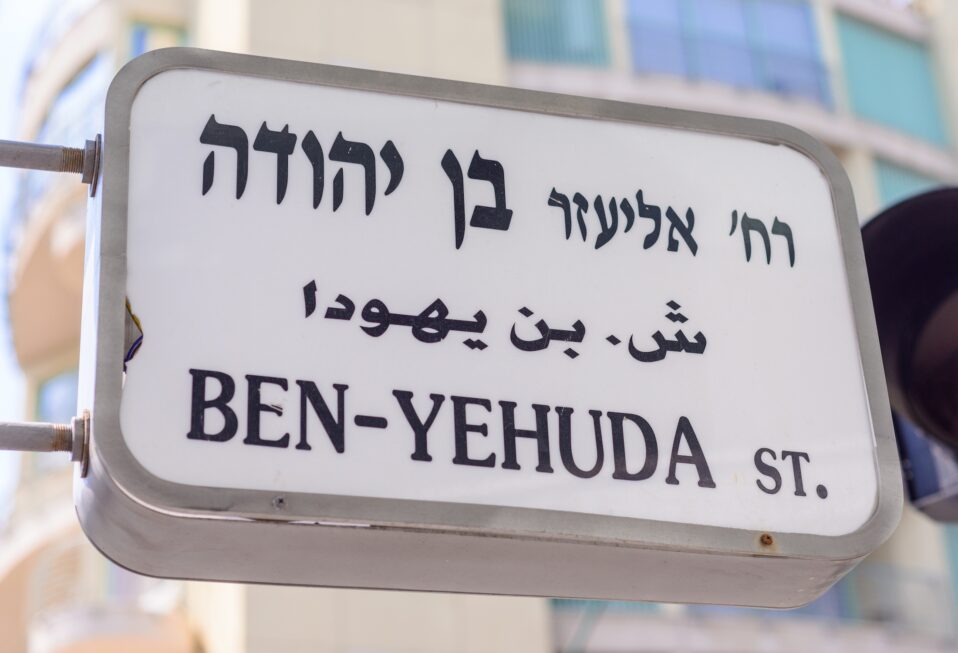 In the last decade, Jews making Aliyah have immigrated to their ancestral homeland from 150 countries in the diaspora that reaches from Asia, to America, to Ethiopia, Europe, and beyond. Israel’s capital bustles with a mosaic of some 950,000 Jews living in Jerusalem, which is crisscrossed with 3,000 streets.

One of the most famous of these—Ben-Yehuda Street—is a vibrant downtown area crowded with locals and tourists enjoying conversations, shops, street musicians, and restaurants. The street signs stand as more than silent markers, though; they symbolize a fascinating 3,000-year history with names like Street of the Prophets (Rehov HaNevi’im), the Via Dolorosa (Jesus’ route to His crucifixion), Herzl Street (after Theodore Herzl, leader of the Zionist movement), and two streets named to honor Prime Ministers David Ben-Gurion and Golda Meir.

Jerusalem’s Ben-Yehuda Street became a pedestrian mall in 1983. The street is known as “Midrechov” in the Hebrew language—a descriptive combination of two words—midracha (sidewalk) and rechov (street). This famous street was already named “Ben-Yehuda” in what was called Palestine under the British Mandate, long before the modern state of Israel was established in 1948. It carries the name of the man whom God used to revive the Hebrew language, Eliezer Ben-Yehuda. His brilliant legacy is a story of miracles.

Ben-Yehuda was born Eliezer Yitzak Perelman in the Lithuanian village of Luzhkya on January 7, 1858. He was raised in a religious home and he learned Hebrew as a child. In those days, Hebrew was not spoken widely; it was found mostly in religious articles, Scripture, and Jewish seminaries. An excellent student, Perelman attended a religious school and wanted to become a rabbi. Gradually his tastes changed—he abandoned his religious interest and opted for a secular education. He did not, however, abandon his passionate interest in Hebrew, and like many other secular Zionist Jews Perelman developed a great interest in a Jewish national homeland. He hoped to see spoken Hebrew once again woven into Jewish society. Other classical languages had experienced a revival; so why not Hebrew, he reasoned.

While Zionism provided the context for his focus, he once described hearing a voice as a teenager that confirmed his life’s work. “Suddenly—it was as if the heavens opened and a light shone forth—a pure and gleaming ray flashed before my eyes, and a mighty inner voice called in my ears.” At that moment, Perelman believed he was being instructed to revive Israel’s language in the land of the fathers!

I find it interesting to note the historical time period. Ben-Yehuda immigrated to Israel in 1881, prior to Theodore Herzl’s First Zionist Congress in Basel, Switzerland, in 1897. These two astonishing, determined men—the Father of Modern Hebrew and the Father of the Modern Jewish State—were born only two years apart: Ben-Yehuda (1858-1922) and Hungarian-born Herzl (1860-1904). Neither of these history-changing men lived to see their reborn homeland.

In preparation for his family’s new life, Perelman changed his name to the Hebrew name Ben-Yehuda. Devoting himself to building written Hebrew into a national language, he developed a strategy that was simple yet intensely demanding: Only Hebrew was to be spoken in his home, the first household of its kind. His son, Ben-Zion Ben-Yehuda, was the first modern Hebrew-speaking child. Plenty of opposition arose from Jerusalem’s ultra-Orthodox, who accused him of invading the holy Torah. They eventually excommunicated him. The Hebrew word for hardship—telaah—surely applies to Ben-Yehuda and his family.

Due to Ben-Yehuda’s endurance and determination, Hebrew—which hadn’t been used in everyday language since biblical times—was set for a revival, becoming Israel’s spoken tongue 2,000 years later. As years passed, the lexicographer often worked 18-hour days developing new words. He founded a periodical to list words and called it Hatzevi, which means “Gazelle.” Other families joined up and Zionist educators gladly used Hebrew as a practical solution for new immigrants. The focus on new immigrants learning Hebrew in Israel continues to this day in government-run and private facilities.

In 1890, a Hebrew Language Council was founded and set up by Ben-Yehuda, who drafted its purpose and methods. The group examined Hebrew literary vocabulary from thousands of years ago: Aramaic; Hebrew roots, to create innovative word forms; Arabic roots; and non-Semitic words already in common use. The early committee developed into the Academy of the Hebrew Language, pioneered by 23 scholars and writers in multiple related fields. The Academy actively operates at Hebrew University today.

Imagine for a moment Ben-Yehuda’s early days in the 1890s. First, he had already studied Hebrew, and when he and his wife Deborah disembarked their ship in Jaffa, he was elated to speak enough Hebrew to talk with a Jewish innkeeper and a wagon driver. After their son was born in 1882, everyday terms like ice cream, bicycle, spoons, trees, book, and many hundreds of words for children were added. Plus, the emergence of electricity, telephones, agriculture, manufacturing, and other modern developments required even more words. A language renaissance was unfolding under his roof in Jerusalem!

Over the years, on Hebrew University’s campus, the Academy of the Hebrew Language has confronted the need for thousands of new words due to Israel’s near-daily discoveries in health, science, technology, and politics. This year, the Academy added 500 new words to the Hebrew dictionary that reflect changes in modern society. For example, half of the 500 words are related to politics—words such as embargo, activism, capitalism, and disinformation. The addition of “symptomatic” and other health terms is due to COVID-19.

A brief official history shows that in 1922, under the British Mandate that governed Palestine, Hebrew was declared the official language for the Jews just a month after Ben-Yehuda’s death. Then in 1948, the modern Jewish state deemed Hebrew and Arabic as official languages. In July 2018, Israel enacted a law that made Hebrew its only official language and gave Arabic a “special status.”

In 2010, Israel’s Knesset officially declared 21 Tevet, Ben-Yehuda’s birthday, as National Hebrew Day. Tevet, a 29-day month, is the fourth month on the Jewish calendar and occurs on the Gregorian calendar in December/January. Evangelicals may want to celebrate Eliezer Ben-Yehuda’s birthday too, due to our emerging interest in Hebrew roots since Judaism is the birthplace of Christianity. We are keen to learn what we view as deeper meanings in Hebrew words and translations.

The Hebrew word, Shalom, is a case in point. Often “peace” is preferred when translating this term into English. Yet as a root verb, the word is replete with rich meanings that include wholeness, health, well-being, safety, tranquility, and rest.

The fact that our Jewish Savior spoke and read Hebrew makes it deeply meaningful. Hebrew is the language the Lord spoke when transmitting the Torah to Moses and which the prophets used. Acts 26:14 describes Jesus speaking Hebrew to Saul on the Damascus Road, and the redeemed Paul spoke to Jerusalem’s Jewish believers in Hebrew. It is the foundation of the New Testament, which includes 283 direct quotes from the Old Testament. The Gospel writers and disciples spoke the language and only read Old Testament scrolls since the New Testament had not yet been written. The Old and New Testaments are one book, foretelling our one Jewish Savior, in one magnificent book of unconditional love!

On the CBN Israel Facebook page, look for the “Hebrew Word of the Day” and its meaning. You may be like me. I do not speak Hebrew, but I started making a list of the various words being posted throughout the week. In Matthew 24:35 Jesus declares, “Heaven and earth will pass away, but My words will never pass away.” It is so valuable for us to learn the words of the Hebrew Scriptures and the central language that Jesus Himself would have spoken.

Please join CBN Israel this week in praying for the Jewish nation and people:

Your ticket for the: The Famous Ben-Yehuda Street: A Walk Into Jerusalem’s History

The Famous Ben-Yehuda Street: A Walk Into Jerusalem’s History