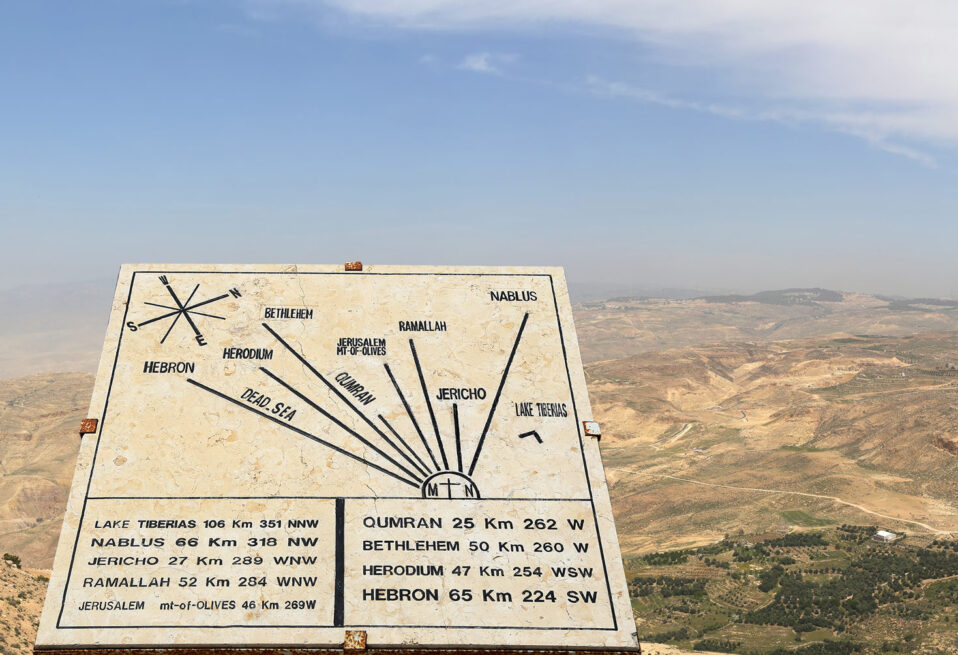 Mount Nebo is in the Transjordan (the modern Kingdom of Jordan) in the biblical territory of Moab. From here, Moses viewed the promised land, which he was not permitted to enter due to his disobedience in the Wilderness of Zin (Numbers 20).

God also buried him on Mount Nebo (Deuteronomy 34:1-8). The two and a half tribes that remained east of the Jordan River (Reuben, Gad, and half of the tribe of Manasseh) name Mount Nebo as part of the territory they requested from Moses. Its situation near to the southern end of Gilead (see Deuteronomy 34:1) and within Moab meant that, like other locations along this border, at times it came under the control of Israel and at others the Moabites laid claim to it.

Near to the mountain was a village also named Nebo (Numbers 32:3; 32:38; Isaiah 15:2; Jeremiah 48:1). The preservation of the name of the city aided later travelers and pilgrims in identifying Mount Nebo, which has been identified as such since the 4th century A.D. Byzantine pilgrims routinely visited Mount Nebo and left descriptions as to its location.

The two most important peaks are Siyagha in the north (2130 feet) and Mukhayyat (2370 feet). Both yield evidence of human presence for thousands of years. From both locations, one has a dramatic view of the Dead Sea, the Jordan Valley and Jericho, and the wilderness of Tekoa to Jerusalem.

Excavations on Siyagha revealed a basilica with mosaics and a monastery that developed around it. So too, excavations on Mukhayyat revealed several Byzantine churches as well.

Your ticket for the: Biblical Israel: Mount Nebo