The Lasting Legacy of the First Zionist Congress 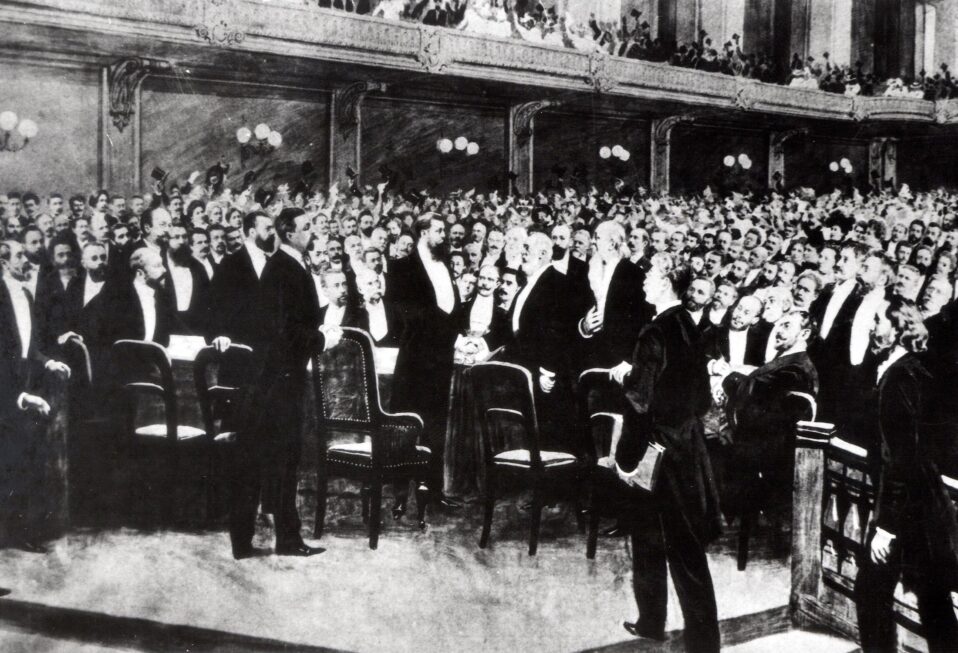 A significant quasquicentennial celebration ended yesterday: the 125th anniversary of the First Zionist Congress held August 29–31, 1897. That inaugural congress convened on these dates in Basel, Switzerland. Theodore Herzl, father of Modern Zionism and founder of the First Zionist Congress, described that pioneering event as “three days of awakening Jewish history.”

Indeed Herzl—“Visionary of the State” (Hebrew: Chozeh HaMedinah)—would be astonished at how Israel’s history has not only awakened but flourished—with innovations, immigration, and more than 7 million in their Jewish population. The World Zionist Organization (WZO) that Herzl also founded in 1897 drew more than 1,300 Jewish leaders in 2022 for three days of celebrations, seminars, and discussions of future plans.

The First Zionist Congress could be considered a symbolic Jewish parliament in the early Zionist movement propelled by three factors: Herzl’s extraordinary perseverance, his book, Der Judenstaat (“The State of the Jews”), and the coalition he developed with numerous Jewish organizations. The founding platform’s goal was: “Zionism strives to create for the Jewish people a home in Palestine secured by public law.”

Herzl’s vision, however, extended beyond the Jewish community. Here’s a little-known fact: Herzl sent 10 invitations to Christian leaders to attend the First Congress along with 200 Jewish leaders. His invitations were a precursor to strong Jewish and Christian cooperation and friendships. You may not recognize the two most prominent leaders in the delegation, but they were deeply committed to Herzl and the vision of a Jewish state: Henry Dunant and the Reverend William Hechler.

Dunant was a Swiss banker and Christian missionary. He dedicated himself to providing humanitarian aid for wounded soldiers, thereby inspiring the founding of the Red Cross and the Geneva Convention. He later received the first Nobel Peace Prize in 1901 and became an advocate for a “Jewish colony” in Palestine. Herzl called him a “Christian Zionist,” the first known use of the term, due to their common goals and Dunant’s help with the Zionist movement.

Rev. William Hechler was a minister at the British Embassy in Vienna where Herzl lived. After reading The Jewish State, he committed himself to Herzl’s vision and opened key introductions for him. Hechler’s activism won the respect of the World Zionist Organization, which later gave him a pension until his death in 1931. Herzl wrote in his diary about meeting Hechler: “Heckler declares my movement to be a biblical one, although I proceed rationally in all points.” That meeting led to an enduring friendship between the secular Jew and the Christian pastor.

Herzl did not live to see the miracle of the 1948 modern Jewish state with its reinstated ancient name, “Israel.” Nevertheless, although he died of heart failure in 1904, his legacy is strong, expansive, and deepening.

Herzl’s legacy includes having Christian leaders in the first Zionist Congress 125 years ago to help pioneer the Zionist movement. Today, among several hundred Christian leaders attending the 2022 Zionist Congress this week, members of the International Christian Embassy Jerusalem (ICEJ) staff are also participating. ICEJ is based in Jerusalem with offices in 86 nations. The ICEJ Switzerland branch hosted an event in Basel, with ICEJ President Jurgen Buhler opening the conference and ICEJ Vice President of International Affairs, Dr. Mojmir Kallus, giving the closing address.

ICEJ, a nondenominational evangelical charity, began in Jerusalem in 1980. Launched by Christians from 32 nations, ICEJ is founded on Isaiah 40:12, which directs them to “Comfort, comfort my people, says your God. Speak tenderly to Jerusalem.” They carry out their biblical assignment in extensive ways.

Their outreach includes providing hundreds of portable bomb shelters to Jewish communities, assisting over 150,000 Jews in Aliyah, operating their Haifa Home for Holocaust survivors, holding worldwide weekly prayer for Israel’s well-being, educating the global church to combat anti-Semitism, and promoting reconciliation between Jews, Christians, and Arabs. Their annual Feast of Tabernacles celebration and tours draw thousands worldwide for one of the biggest events in Israel.

David Parsons, ICEJ vice president and senior spokesman, provided exciting news about Christian delegates at the Zionist Congress who created a robust, inspiring “Resolution of the Basel Conference Marking 125 Years of Zionism.” The excellent document is too long to include but here are several points.

The Resolution honors the 1947 Seelisberg [Switzerland] Conference: The Foundation of the Jewish-Christian Dialogue, which took place after the Holocaust and prior to the rebirth of the Jewish state. It is officially known as the International Emergency Conference on Anti-Semitism. Its participants codified 10 points for an increased Christian-Jewish dialogue that served as a tool to fight anti-Semitism. All their points are useful for us today.

The Resolution of the Basel Conference Marking 125 Years of Zionism also includes six additional points in the spirit of the 1947 Seelisberg Conference. Again, all points are important yet lengthy. Here are a few:

Israeli president Isaac Herzog attended, along with businessmen and philanthropists from 38 countries. Although 1,000 protestors in the anti-Semitic Boycott, Divestment and Sanctions (BDS) movement showed up, Swiss security was widespread and successful. Yaakov Hagoel, chairman of the World Zionist Organization, was dismissive of the protest: “We came to Basel because here, in this place, Zionism was actually born. Now, 125 years after the Congress, no one can shut us down. We will continue the conference in its format … in order to plan a better future for the State of Israel.”

If Theodore Herzl and the Jewish and Christian pioneers could somehow see into 2022, they would likely break out singing HaTikvah, Israel’s national anthem adopted at the first Zionist Congress.

Please join CBN Israel this week in prayer for Israel and the Jewish people:

Your ticket for the: The Lasting Legacy of the First Zionist Congress

The Lasting Legacy of the First Zionist Congress