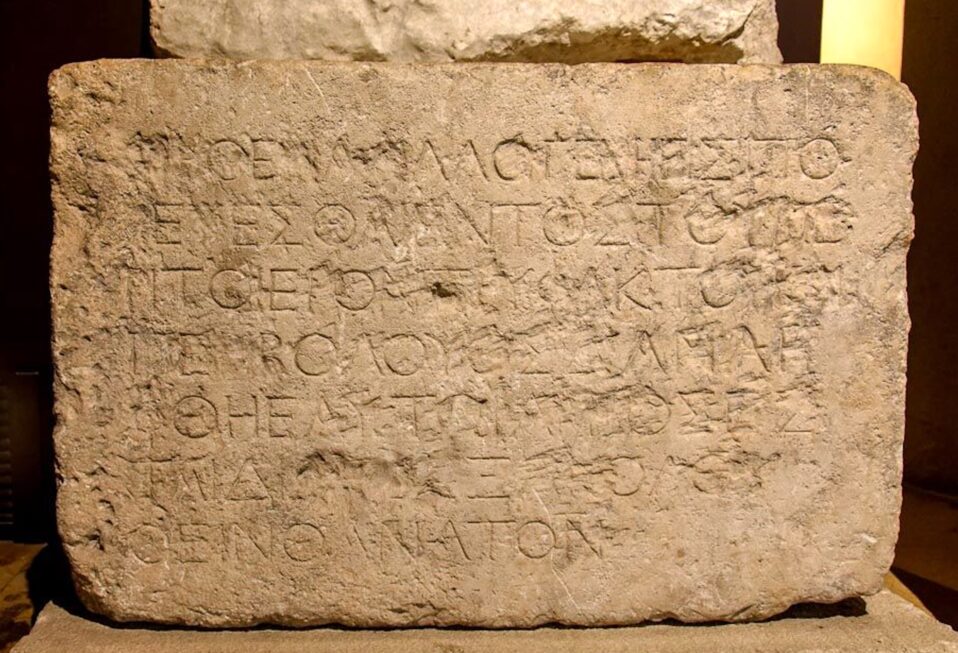 The first century Jewish historian Josephus described the Jerusalem Temple in great detail. He noted that the large outer court was separated from the holy precincts by a balustrade that had inscriptions in Greek and Latin forbidding non-Jews from passing this wall. Non-Jews were permitted to be in the outer court, which lay outside the sacred area of the Temple.

A thick marble slab with seven lines inscribed in Greek warning “foreigners” (non-Jews) from passing the balustrade of the Temple and entering its sacred precincts was discovered in 1871, north of the Temple Mount in Jerusalem. The inscription reads: “No foreigner is to enter within the balustrade and forecourt around the sacred precinct. Whoever is caught will himself be responsible for (his) consequent death.” It currently resides in the archaeological museum in Istanbul, Turkey. A broken marble slab with six lines inscribed in Greek was discovered in the area of Lion’s Gate in the Old City of Jerusalem. It resides in the Israel Museum in Jerusalem.

Both inscriptions verify Josephus’ description of the warnings on the balustrade of the outer court of the Temple. Paul was accused of violating this prohibition by bringing non-Jews past the partition (Acts 21:26-30). Paul also used this physical partition, which separated non-Jews from the sacred areas of the Temple when he wrote to the Ephesians:

“So then, remember that at one time you were Gentiles in the flesh—called ‘the uncircumcised’ by those called ‘the circumcised,’ which is done in the flesh by human hands. At that time you were without the Messiah, excluded from the citizenship of Israel, and foreigners to the covenants of the promise, without hope and without God in the world. But now in Christ Jesus, you who were far away have been brought near by the blood of the Messiah. For He is our peace, who made both groups one and tore down the dividing wall of hostility. In His flesh, He made of no effect the law consisting of commands and expressed in regulations, so that He might create in Himself one new man from the two, resulting in peace. He did this so that He might reconcile both to God in one body through the cross and put the hostility to death by it” (Ephesians 2:11-16; emphasis added).

According to Paul, that which served as a sign in the Jerusalem Temple for the separation between Jews and non-Jews had been abolished in God’s redemptive community, in which Jews and non-Jews were now reconciled.

Your ticket for the: Biblical Artifact: Temple Warning Inscription