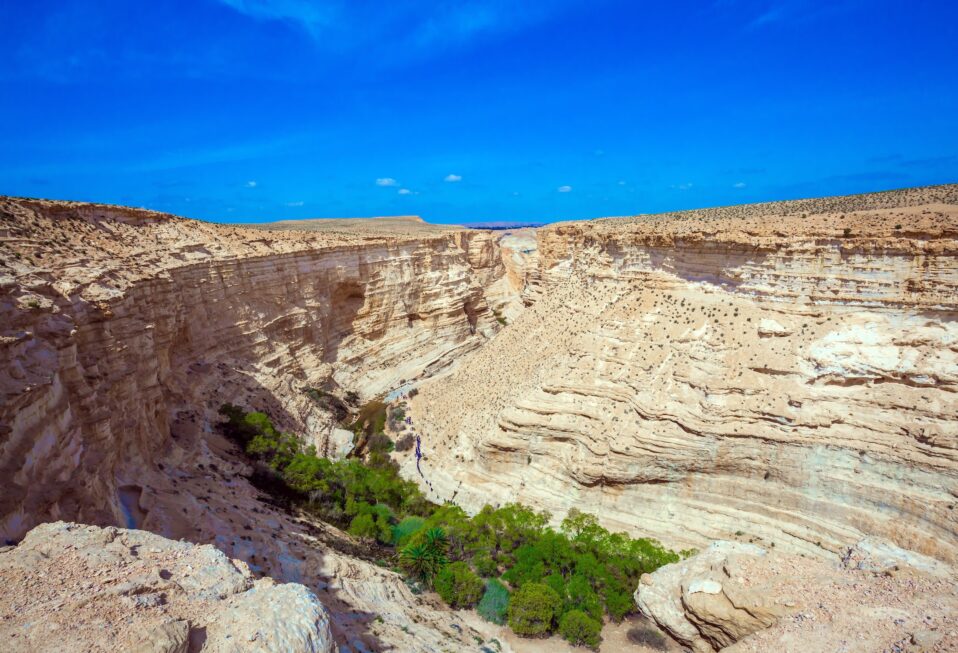 Biblical Israel extended east of the Jordan River into the area of Gilead. The southern part of modern Israel south of the Beersheva basin, towards the Gulf of Elat, lay outside of biblical Israel; in fact, this area comprised the Wilderness of Zin and Paran. Thus, one can tour the Wilderness of Zin in modern Israel and discuss how Moses sent spies from here into the promised land (Numbers 13:21).

So, Moses made it into the modern State of Israel, but not inside the boundaries of biblical Israel. What further compounds this confusion is the use of biblical place names within modern Israel that do not refer to the same geographic areas, for example, the Negev. Today, the Negev refers to the land south of the Hebron Hills down to Elat. In the Bible, the Negev refers to the Beersheva basin, which cuts east-west across the central hill country that continues to the south. This can be confusing to the modern traveler to Israel.

The largest river west of the Jordan River is the Zin River, which extends from the hills south of the Beersheva basin east towards the Jordan Valley. This river does not always run with water, but around Avdat (a Nabatean trading center) springs flow into the Zin year-round. It is fitting that in this area Moses sought water for the children of Israel wandering in the wilderness (Numbers 20). It was here that Moses in his frustration with the people struck the rock to bring water from it rather than speaking to it as God had commanded.

Because of his disobedience, God did not permit Moses to enter the promised land; he could only look into it from Mount Nebo (Deuteronomy 34). Water was essential in the dry wilderness, yet shepherds, like Moses, often herded their flocks in such inhospitable terrain. The sheep depended upon the shepherd to provide water for them; thus, shepherds became adept at finding water in seemingly waterless wastes.

The Nabateans, a desert people, who lived in the region in the first century, whose capital was the rose red city of Petra, learned to navigate the desert by sophisticated water collection. Their water reservoirs were known only to them, which enabled them to traverse the harsh dry land and capitalize on the trade routes between Petra and the port-city of Gaza. Avdat, which sits above the Zin Valley, served as one of their stations along these desert trade routes.

Your ticket for the: Biblical Israel: Wilderness of Zin