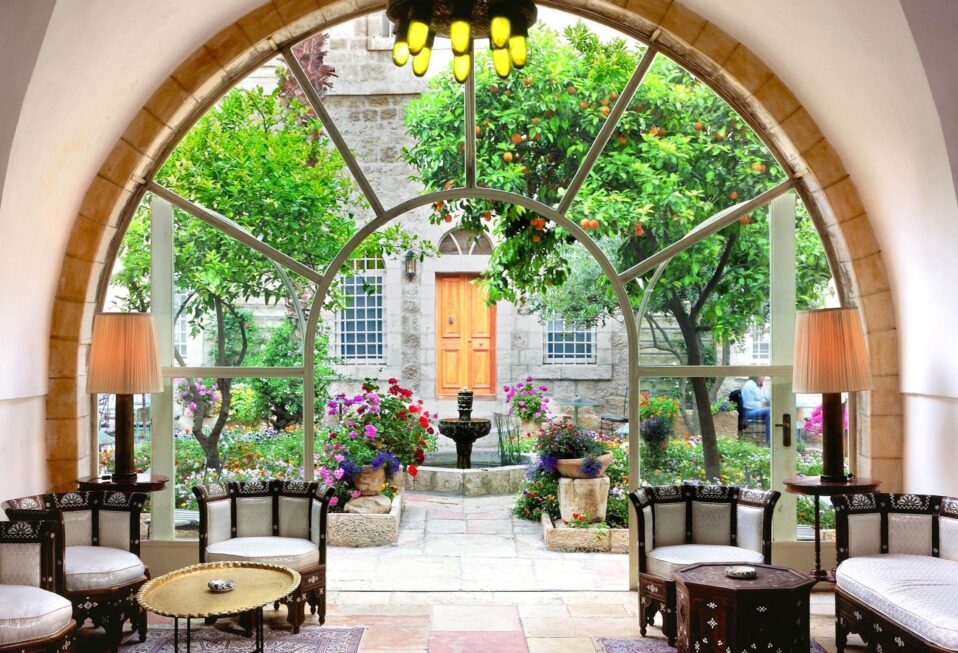 Over the years, many of the informative briefings I staffed took place at the historic American Colony Hotel in Jerusalem. My groups of Christian leaders explored Israel within both a spiritual and a geopolitical context. Briefings came from both Jewish and Palestinian leaders, and the American Colony Hotel served as a location that was always on our agenda for an important briefing from a Palestinian representative.

History unfolded as we walked along a wall that displayed old photos, postcards, memorabilia, and framed documents. This same wall captivated 21st-century Christian leaders when they learned that the hotel had been founded by a 19th-century Christian community of Americans and Swedes led by attorney Horatio Spafford, who moved to Jerusalem in 1881.

After we climbed the stairs to the elegant Pasha meeting room and settled into our seats, I shared Spafford’s story. His beloved hymn, “It is Well With my Soul,” has provided 149 years of solace and hope to generations of believers since he penned it in 1873. I began singing “It is Well With my Soul,” and my group became the glorious Pasha Room a Capella Choir! In the former Jerusalem dwelling of the hymn’s lyricist, tears filled our eyes. Singing Spafford’s hymn is inscribed into our memories of holy moments in the Holy Land.

If you have stayed in or visited this lovely hotel and flower-filled grounds situated near the seam of western and eastern Jerusalem—the former armistice line after the Six-Day War—it is immediately clear that the American Colony Hotel is a historic jewel from another era.

The jewel shines in more ways than one. Before its transformation into a hotel, an American group of Christians distinguished itself as forerunners in humanitarian outreach in the Holy Land. Their pioneering efforts are now expressed in outreaches of massive goodwill through hundreds of Christian organizations and millions of believers worldwide.

The founders, prominent Chicago attorney Horatio Spafford and his wife, Anna, moved to Jerusalem after a horrific tragedy in 1873. Horatio had sent his wife and four daughters on the luxurious French passenger ship Ville du Havre to Europe for a vacation. He planned to join them shortly after settling last-minute business. On the Atlantic voyage, an ironclad clipper out of Glasgow, Scotland, plowed into the Ville du Havre in the dark of night and split it midships. Twelve minutes later, the ship sank. Two hundred and seventy-three souls drowned in the frigid waters; only 47 survived. Despite Anna’s desperate resolve to save her daughters, ages 11 to 2, they slipped out of her arms into the fearsome high seas. The children perished; Anna survived.

She was later found unconscious atop a ship’s plank and rescued. After being evacuated to Paris, she sent a telegram to her husband with these dreadful words, “Saved, but saved alone. What shall I do?” Upon receiving the telegram, Horatio Spafford left Chicago to reunite with his grief-stricken wife. When the ship drew near to the tragic spot, the captain called Horatio up to the bridge. Later that night the grieving father’s profound words poured onto the paper, expressing not only his sorrow but his hope bound up in the beloved hymn with lyrical words, “The trump shall resound, and the Lord shall descend…”

Waves of sorrow had begun rolling in for the Spaffords prior to this tragedy at sea. The wealthy Chicago couple had lost their 4-year-old son to scarlet fever, then the Great Chicago Fire of 1871 destroyed most of their real estate holdings. In a three-year span, their five children died, leaving them childless and without their former wealth.

One answer to Anna’s heartbreaking telegram, “Saved, but saved alone. What shall I do?” came with the births of three more children. The devoted Christian couple chose to ease their deep wounds first by supplying food and other necessities to families that survived the Great Chicago Fire. Later, believing the unmistakable biblical relevance of the Holy Land, they moved to Jerusalem with a group of 17 Americans and began an outreach there.

This first group rented a small house and lived a simple communal lifestyle. Locals often referred to them simply as “the Americans.” When a group of Swedish Christians moved to Jerusalem to join up with them, together they purchased and then moved into a mansion in 1883. (The dwelling had been built by an Ottoman nobleman—a Pasha—for his family.) By this time, the Christian group numbered 150 men, women, and children. They officially named their new home the American Colony.

The Colony set about establishing a clinic, an orphanage, and a hostel. The Christian commune expressed their faith by serving everyone in need, including the Jewish, Muslim, Christian, Arab, and Bedouin communities. This ministry of mercy was respected and admired during the waning years of the Ottoman Empire. (Also known as the Turkish Empire, this once-vast realm was founded in 1299 and had ruled over much of southeastern Europe, North Africa, and western Asia.) Although outwardly neutral, the Colony remained dedicated to the Holy Land and all its people.

In the lead-up to World War I, the Ottoman Empire began to disintegrate. As war exploded throughout Europe and the Ottoman realm, Jerusalem was also invaded by hunger, typhus, field-ravaging locusts, and weapons of war. The Colony’s merciful ministry became even more pronounced.

With the help of donations from American Christians, the Colony managed to feed 2,000 Jerusalemites daily in city-wide soup kitchens. Through Christian Herald newspaper advertisements in the U.S., the Colony employed hundreds of women who made lace and dresses for export to the United States. With Red Cross and Red Crescent approval, the American Colony also managed the military hospitals—where they treated both Turkish and European POWs.

Colony members also preserved their early history by taking and printing photos of the people and environs. Today, these photographs offer a priceless look into Jerusalem’s history. In recent decades, the descendants of the Colony donated parts of this incomparable heirloom photo collection to the Library of Congress.

The Spaffords superbly embodied 2 Corinthians 1:3-5: “Praise be to the God and Father of our Lord Jesus Christ, the Father of compassion and the God of all comfort, Who comforts us in all our troubles, so that we can comfort those in any trouble with the comfort we ourselves receive from God. For just as we share abundantly in the sufferings of Christ, so also our comfort abounds through Christ.”

Although the Spaffords faced unimaginable sorrows, they rested in their faith in the Lord Jesus Christ. With His enduring comfort and help, they and the American Colony left a legacy of faith in action for today’s Christians both personally and corporately. In the ensuing decades, when the American Colony became a full-fledged luxury hotel, it also followed the imprimatur of the Christian founders by remaining an island of calm for all sides in many a stormy political or wartime sea. Israelis, Palestinians, diplomats, mediators, journalists, and representatives of all faiths meet there to this day to discuss the multifaceted issues challenging the region.

Join us at CBN Israel to prayerfully revisit the first verse of the beloved hymn as a reminder of the profound meaning, the Lord’s unconditional love, and turning our sorrows into acts of compassion to honor our Lord Jesus and all peoples in Israel.

When peace like a river attendeth my way,
When sorrows like sea billows roll;
Whatever my lot Thou hast taught me to say,
“It is well, it is well, with my soul.”

Please join us in prayer this week for the Holy Land:

Your ticket for the: How Faith in Action Led to Christian Humanitarian Aid During the Ottoman Empire