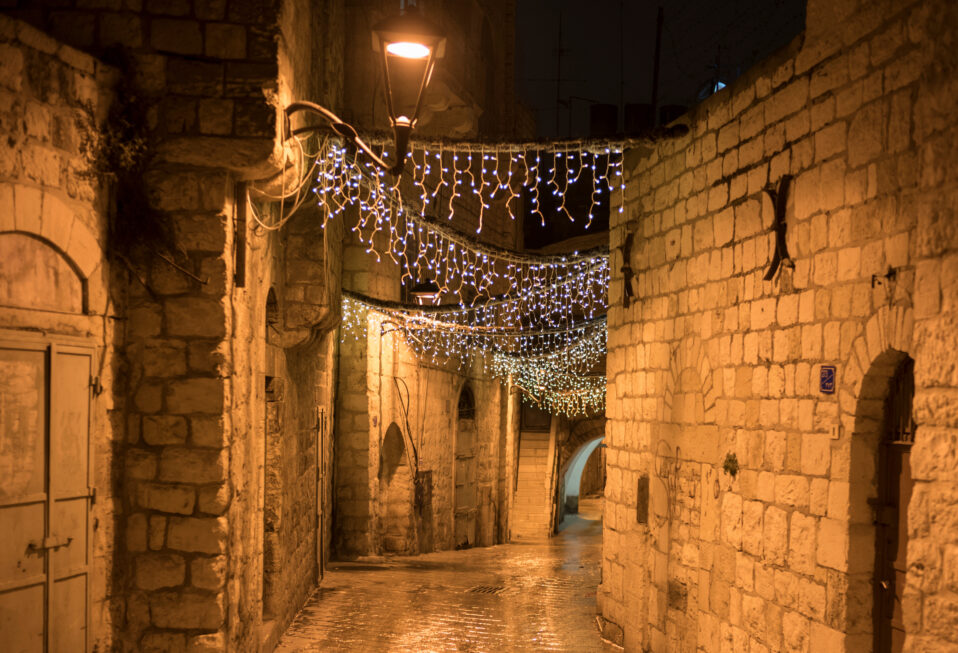 On Saturday December 3, lights were set ablaze on the tall Christmas tree in Bethlehem’s Manger Square. Its lighting marked the beginning of the Christmas season where Christian pilgrims by the thousands will travel to Israel for festivities—the first time since the two-year COVID-19 lockdown left Bethlehem’s streets empty. Expectations run high for the “Christmas rejoicing” in this city of 100,000. Paramount in the minds of Christians is singing beloved carols and standing in the land where Jesus was born.

I am grateful that Christians celebrating Jesus’ birth in Israel are familiar with biblical truths. However, the light of truth has dimmed amid the Muslim Palestinian leaders’ versions of Christmas, which are sacrilegious in the extreme. Here’s when that sacrilege began:

In 1995, an extraordinary announcement was made on the roof of the Church of the Nativity, when now-deceased Palestinian Liberation Organization (PLO) Chairman Yasser Arafat declared, “Welcome to Bethlehem, birthplace of the first Palestinian Christian—Jesus Christ.” We know that Jesus was neither a Christian nor a Palestinian. Yet current Palestinian Authority (PA) President Mahmoud Abbas has kept up the Arafat lies, falsely asserting that Jesus was “a Palestinian messenger who would become a guiding light for millions around the world.”

Unfortunately, many have swallowed the “Palestinian messengers”  propaganda—among them Palestinians, world media, far too many United Nations member nations, and yes, Christians who do not follow scriptural truths.

It gets worse. The Palestinian Authority Daily published an imam’s 2020 comment about Jesus, calling Him “the first Palestinian fida’i (self-sacrificing fighter).” That term reveals the true nature of the PLO and PA’s Fatah leaders who in essence seek to coopt Jesus and portray Him as the first Palestinian terrorist. Palestinian Media Watch reports that in political cartoons, they depict Palestinians on a crucifix. It seems that the Palestinian leadership and media are willing to stoop so low as to substitute the words “Jesus” and “Israel” for “Palestinian” and “Palestine” without any hesitation or remorse.

Tragically, the hopes for peace never materialized from the 1993 Oslo Accords signing that granted governance through Yasser Arafat’s PLO to the Palestinian Authority. Instead, Bethlehem’s Arab Christians have suffered intimidation for decades—ever since the Muslim Palestinian rule began.

For readers who have traveled to Bethlehem in earlier years and better times, you blessed the Arab Christian businesspeople in their shops filled with beautiful mementos. Since the Muslim Palestinian Arabs have taken over, however, the Arab Christian population has dwindled as persecution escalated. For example, before the Oslo Accords, Christian Arabs lived as the majority in Bethlehem. As the Muslim population has increased for the last 50 years, the Arab Christian majority has fallen from 80 percent to 15 percent. Unlike in Israel—a country that protects religious freedom—no such Palestinian law exists. Although Palestinian leaders insist they protect every religion, the reality is far different. Christians are now treated as second-class citizens. They can no longer travel freely, or shop wherever they want. Small wonder that Christians choose to leave Bethlehem.

Nevertheless, another reality shines far brighter: dispelling darkness in Bible-believing hearts. What I am sharing about Bethlehem isn’t the usual Christmas story outlined in our beloved Christmas carol’s reference to the sleepy, humble “little town.” Rather, we go back further in history to Genesis 35:19-21, which describes the location of Jesus’ birth in Bethlehem (Ephrath) as being situated on the road between Jerusalem and Bethlehem.

In Genesis 35:19-21, Jacob cast his tent at Migdal where he buried Rachel, the love of his life. “So Rachel died and was buried on the way to Ephrath (that is, Bethlehem). Over her tomb Jacob set up a pillar, and to this day that pillar marks Rachel’s tomb. Israel moved on again and pitched his tent beyond Migdal Eder.” Micah 4:8—a prophecy written around 700 years before Jesus’ birth—expands the details: “As for you, watchtower of the flock, stronghold of Daughter Zion, the former dominion will be restored to you; kingship will come to Daughter Jerusalem.”

For centuries, shepherds were familiar with the Tower of the Flock, which could be considered an ancient animal hospital. The tower and the Bethlehem fields were their workplace. The stone structure was two stories, allowing the chief shepherd to look out over the flock for predators. Shepherds also led the ewes from the fields into the tower to give birth.

The religious leaders of that day appointed the Bethlehem shepherds—since they were experts in animal husbandry—as shepherd or Levitical priests. The thousands of lambs they tended on the birthing floor of Migdal Eder each year were special, too. At birth, the shepherds wrapped them in swaddling cloths and put them in mangers so the lambs would not harm their limbs. Otherwise, they would be disqualified as a Temple sacrifice, for perfection was the rule. When the lambs reached a year old, the shepherds herded thousands of them into Jerusalem on what the ancient Jews called the Day of Lambs to present them to the Temple priests. They were the Chosen Passover sacrificial lambs without spot or blemish—a description of our Savior also sacrificed at His last Passover for us.

The Tower of the Flock no longer stands, but various writings reinforce the shepherds retelling their stories for hundreds of years—until a Byzantine monastery was built over the site of Migdal Eder in the fourth century.

King David, who was born in Bethlehem, would have known about Migdal Eder from Jewish scrolls and from shepherding. Joseph, Mary, and everyone else in the Roman world were required to go to their ancestral town by Caesar Augustus’ imperial decree for a census. Surely it was no coincidence that the young Jewish couple would go to Bethlehem, Joseph’s hometown. Rather, it was all part of God’s plan that Mary would give birth to Jesus in Bethlehem—in or close proximity to the Tower of the Flock.

These glistening threads of history are wondrous. When angels appeared to the shepherds in the Bethlehem fields with their glorious birth announcement, the shepherds appeared to know where to go based on the directions provided in Luke 2:11-12: “For there is born to you this day in the city of David a Savior, who is Christ the Lord. And this will be the sign to you: You will find a Babe wrapped in swaddling cloths, lying in a manger.” The connection between the birthplace of Jesus and the location of the Tower of the Flock, where the Temple lambs were born, is fascinating.

The late Dr. Jimmy DeYoung Sr., in his Day of Discovery program, described his research on the shepherds’ skill: “They would reach into the mother’s womb and pull out this newborn lamb. Then they would reach for some swaddling and snugly wrap the lamb and lay it in a manger until it calmed down. Then they would unwrap the swaddling and let it run off to its mother for some food.”

Allow this realization to sink deeply into your heart: Jesus’ birthplace was intricately linked with the ancient Levitical shepherds and the Temple-destined Passover lambs. While Roman soldiers nailed the Perfect Lamb of God to the cross—His blood shed outside the walls of Jerusalem—the Temple priests were slaughtering the perfect Passover lambs born in the Tower of the Flock.

Throughout the Christmas season, our decorated trees and homes glow… a wonderful source of joy, tradition, and family memories. May we reflect upon that first Christmas when Jesus, the Perfect Lamb of God, entered time and space as Immanuel, “God with us.” Let us not miss the humble yet splendid context of ancient Migdal Eder in or near where the perfect Lamb of God was born.

Please join CBN Israel this week in praying for Jewish and Arab believers in the region as they celebrate the birth of the Savior:

Your ticket for the: Bethlehem’s Christmas Amid the Palestinian Authority’s Upside-Down History