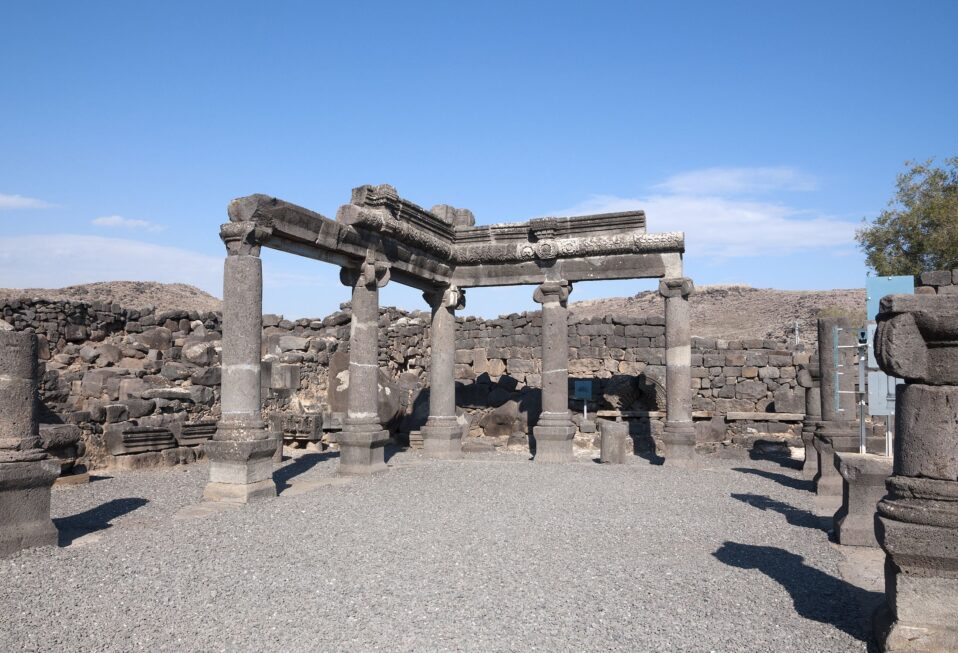 Located two and a half miles north of Capernaum, Chorazin sits in the hills overlooking the lake of Galilee at 45-46 meters above sea level and 267-273 meters above the lake. Although only mentioned once in the Gospels (Matthew 11:21-24; Luke 10:13-16), Jesus cursed the village for not repenting when seeing the miracles he worked in its midst. He cursed Chorazin, along with Capernaum and Bethsaida. Incidentally, the land between these three villages, on the north shore of the lake of Galilee, covers much of the territory of Jesus’ ministry recorded in the Gospels.

The distance of Chorazin from the lake meant that it did not participate directly in the fishing industry on the lake. We learn from rabbinic literature that Chorazin produced exceptional wheat. Excavations of the site reveal that the village, which began in the first century A.D., was a Jewish village.

The majority of the ruins one sees when visiting Chorazin today date from after the first century, but they reflect Jewish village life in the Galilee. The central structure from the later village is the synagogue. Built perhaps as early as the third century A.D., the basalt structure resembles the Galilean style synagogues excavated at places like Capernaum, Bar’am, Meiron, and Arbel.

The synagogue sits in the center of the village. Worshippers entered the hall through three entrances from a large staircase on the south, which faces towards Jerusalem. Two tiers of benches line the two long aisles and the short wall opposite the entrance in a “U” shape. Inside the synagogue, the basalt stone, which is hard to fashion, bears carvings and decorations.

Excavators uncovered pieces of what appears to be a Torah Ark, where biblical scrolls read in the synagogue were kept. They also discovered a basalt stone seat, which was known as the Seat of Moses (see Matthew 23:1-2; Luke 4:20). The chair bears a dedicatory inscription in Aramaic, which reads, “Remember for good Yudan son of Ishmael, who made (or donated) this stoa, and its steps from his property. May he have a portion with the righteous.” Recent excavations in the floor of this synagogue indicate that it may stand on an earlier public building, perhaps the first century synagogue.

Although the ruins of Chorazin that one sees today date to after the first century, the site contains a number of features in the homes, installations, like a covered Jewish ritual immersion bath, and details within the synagogue that help to illustrate stories from the Gospels and the life and ministry of Jesus.

Your ticket for the: Biblical Israel: Chorazin