A Small Christian Charity with a Big Impact in Israel 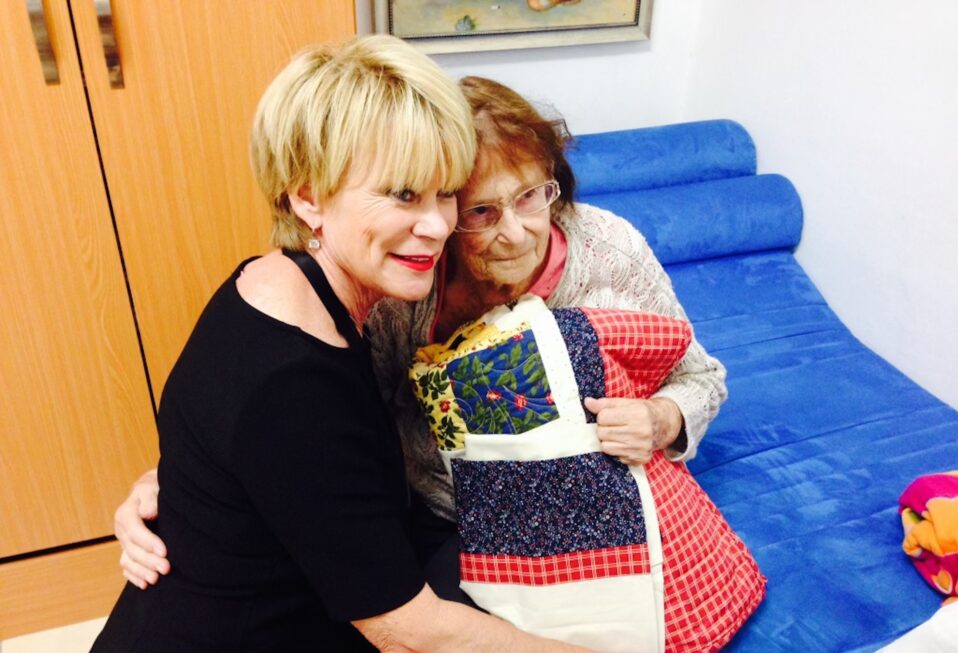 The word “compassion” beautifully describes an American charity named The Works of His Hands. Since 2007, this ministry of mercy—known in Hebrew as Maasay Yahdav—has enveloped thousands upon thousands of Israelis in a kaleidoscope of kindnesses and practical helps. Psalm 111:7 is the primary source for their name: “The works of His hands are verity and judgment; all His commandments are sure.”

The charity was established by Alice Long and Doris Billings Mintz, who took their first trip to Israel in 2007. They boarded their flight carrying a single bag of stuffed animals and hand puppets and visited patients in the only Israeli hospital that opened its doors to them. The women gathered information and met with leaders and organizations to explore future opportunities. Their modest beginnings in a 501(c)(3) humanitarian journey blossomed into partnerships with 38-plus organizations today. The exhortation in Zechariah 4:10—“Do not despise these small beginnings, for the LORD rejoices to see the work begin”—surely applies to them.

The founders’ multifaceted professional backgrounds—Doris’s corporate position in the healthcare industry and Alice’s nursing and telecommunications career—helped equip them to launch the charity. From its inception, their ministry was built on Isaiah 40:1: “‘Comfort, comfort my people,’ says your God.” Everyone active in Maasay Yahdav is a volunteer, including the founders and six-member board. No one receives a salary.

As Maasay Yahdav enters its 16th year, Doris reflects on their first trip. “Our hearts were deeply pierced by the stories of Holocaust survivors, at-risk children, new immigrants, and those suffering in hospitals.” She recounts an unforgettable conversation with Leah Goldin, whose son Hadar—serving in an elite IDF unit—was murdered on the Gaza border by terrorists during Operation Protective Edge in 2014. His body has yet to be returned. “We could feel her grieving heart and palpable grief,” Doris said. “It moved us to do something to memorialize their beautiful fallen sons and daughters.” Outreach to Israel Defense Forces, their families, lone soldiers, and Israeli civilians living under daily threats of rockets is carefully woven into their ministry.

During the group’s year-round operations in the United States, they prepare for ministry in Israel. Teams travel twice a year (spring and fall) with volunteers varying in number from five to 29. In the ministry’s early years, the mostly female volunteers wrestled with four huge duffel bags of handmade quilts, baby clothes, and stuffed animals at the airport. Those efforts grew into dragging 50 duffel bags to the airport! Thankfully, for six years Maasay Yahdav has partnered with First Baptist Church in Morristown, Tennessee, as well as Harvest of Israel, which has shipped more than 75 containers packed with humanitarian aid. Maasay Yahdav adds their contributions, and the shipments await them when the volunteers arrive in Israel to carry donations throughout the land.

In between their two annual trips, Maasay Yahdav is hard at work. They view each day as an opportunity to gather more aid to ensure that their next shipment and trip to Israel are a reality—not a dream. Doris and Alice make presentations in churches, synagogues, and businesses to raise funds for portable bomb shelters and to directly support children, babies, and Holocaust survivors. Many activities throughout the year involve church groups of talented women who fashion beautiful handmade quilts and caps for tiny babies in neonatal intensive care. One year, Doris and Alice delivered a quilt to a Holocaust survivor who lived alone in a small apartment. When they unfolded the quilt for his single bed, with tears in his eyes he said, “This is my first night sleeping under something where I know I am loved.” Stories of blessings abound.

The ministry is a little giant of ever-expanding compassionate help. They solicited more than $100,000 to help place four portable bomb shelters via the Israeli charity, Operation Lifeshield. Each shelter honors the memory of a life extinguished by terror: Lieutenant Hadar Goldin in 2015, Hallel Yaffa Ariel in 2016, Michael Levin in 2017, and Ari Fuld in 2018. In addition, Maasay Yahdav raised enough money to completely finance two permanent bomb shelters. A plaque is affixed on each shelter with the names of the individuals and/or organizations that donated them.

Baumol describes their precarious security situation amid building a newer donated campus in the isolated area. “To the west looms a hill topped with a hostile Boycott, Divestment and Sanctions project called the Tent of Nations. Many European anarchists visit regularly. Our security staff fears the possibility of armed attack or Molotov cocktails from the hill.” Indeed every inch, every Israeli, is at risk. Christians worldwide, following Maasay Yahdav’s example, have a role to play in prayer and help.

Another permanent bomb shelter was dedicated in honor of Doris’s husband, the late Dr. Steve Mintz, who supported his wife’s efforts. She remains dedicated to honoring his Jewish heritage. The bomb shelter is located at the Beit Singer boarding school for children from high-risk homes. It also serves as a classroom. Explains Assistant Executive Director Ariel Rascovsky, “We have a very special chemistry with Maasay Yahdav that for years has resulted in significant efforts to improve the lives of at-risk children. Our children need them very much.” For three months, Alice stayed at Beit Singer where she “loved on them, listened in their loneliness, hurts and anger and experienced the joys and laughter of children from ages 6 to 18 years old. They are the future of tomorrow.”

Maasay Yahdav emphasizes lifesaving in Israel not only through bomb shelters. They also raise donations for a motorcycle ambulance (medicycle) to help Magen David Adom (Israel’s version of the Red Cross). These motorcycles can quickly navigate busy narrow streets to bring lifesaving equipment to ill or injured patients.

Israel is rarely far away from the hearts and minds of Maasay Yahdav’s founders. Although the organization can’t boast many volunteers or much wealth, with a vigorous commitment and a foundation of spirited prayers, the results are plentiful. Those they meet in Israel become family. Doris and Alice are full of gratitude for the love and kindness of donors and volunteers helping to carry out The Works of His Hands together.

Please join CBN Israel this week in praying for Israel and her people in need:

Your ticket for the: A Small Christian Charity with a Big Impact in Israel

A Small Christian Charity with a Big Impact in Israel