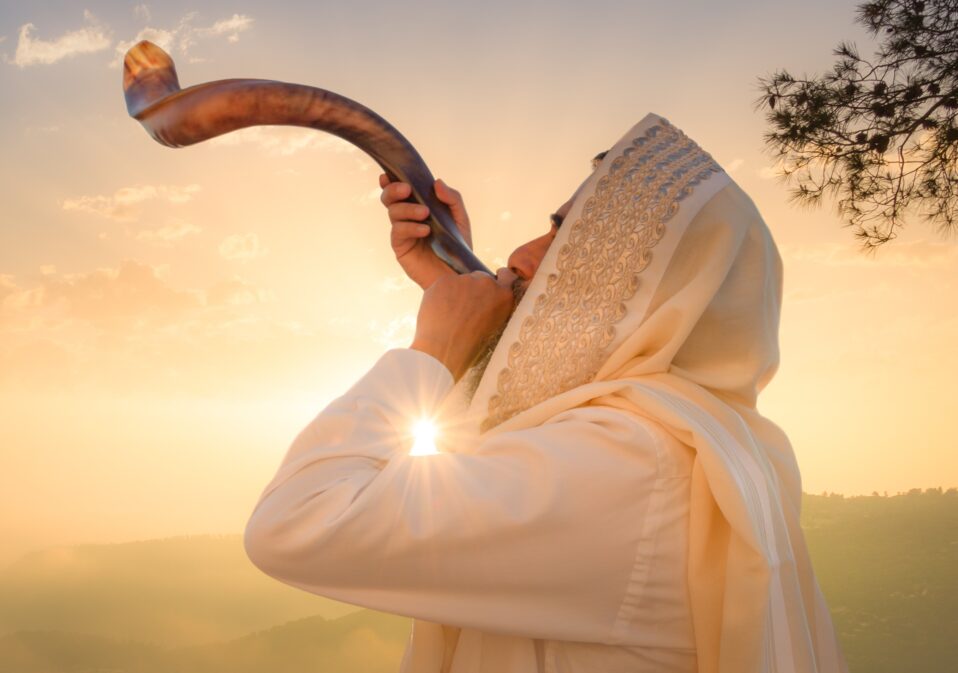 “Give the following instructions to the people of Israel. On the first day of the appointed month in early autumn, you are to observe a day of complete rest. It will be an official day for holy assembly, a day commemorated with loud blasts of a trumpet. You must do no ordinary work on that day. Instead, you are to present special gifts to the Lord” (Leviticus 23:23-25 NLT).

Rosh Hashanah literally means “head of the year”—the new year. But biblically it’s much more than that. In the book of Leviticus in Hebrew it’s called Yom Hateruah—the day of the blowing of trumpets or ram’s horn (shofar)—the judgment day.

The piercing blast of the shofar is meant to remind the hearer to repent for his sins and make things right with his brothers and sisters. The rabbis say that reconciliation with God and man will confound the enemy.

“It’s something that people connect to their soul to hear the sound of the shofar,” says Eli Ribak, a third-generation shofar maker.

The ram’s horn is used as the traditional shofar because when Abraham showed his willingness to sacrifice his son, Isaac, God provided a ram in the thicket to be used in his place. But the only animal horn that is actually forbidden for use as a shofar is the cow’s horn. That’s because the Jewish people don’t want to remind God of the time Israel worshipped the golden calf in the wilderness.

In some traditions, the shofar is blown in synagogues and at the Western Wall each morning for a month before the holiday to give plenty of time for repentance.

Traditionally, Rosh Hashanah is a celebration of creation, specifically the day God created Adam and Eve. As such, God the Creator is hailed and crowned as “our King” on that day.

Christians often blow the shofar throughout the year, but in Judaism it’s only blown during the month of Elul prior to Rosh Hashanah and at the holiday. It was also blown at the coronation of the kings of Israel, to announce the new king or the coming of the king.

Boaz Michael, founder of First Fruits of Zion, says that’s a foreshadow for those who believe in Jesus.

“And they tell us something, they’re speaking to us, they’re reminding us of something and one of the things they’re reminding us of is the creation of the world, the coming of the King, King Messiah one day at this time, the coronation of his kingdom here on earth,” says Michael. “This is what the shofar is to remind us of and it speaks to us every day when we hear that sound.”

For Christians, there are a number of references in the New Testament referring to the sounding of trumpets: “And He will send His angels with a great sound of a trumpet, and they will gather together His elect from the four winds, from one end of heaven to the other” (Matthew 24:31 NKJV).

Paul also writes, “It will happen in a moment, in the blink of an eye, when the last trumpet is blown. For when the trumpet sounds, those who have died will be raised to live forever. And we who are living will also be transformed” (1 Corinthians 15:52 NLT).

The seven trumpets in Revelation also make clear they play a part in the end-time calling.

A festive meal at the start of the holiday includes eating apples dipped in honey for a sweet new year; dates—that our enemies would be consumed; pomegranate seeds—that we would bear much fruit; eating round hallah, symbolizing the circle of life and the crown of God’s Kingship; and eating a fish or ram’s head, symbolic of being the head and not the tail in the year to come.

Another custom is called Tashlich, which literally means “to cast away” or “throw away.” This concept comes from Micah 7:19: “Once again you will have compassion on us. You will trample our sins under your feet and throw them into the depths of the ocean!”

This is a time of reflection to think about and repent for sins of the previous year and to determine how one could do better in the coming year. During this ceremony, Jewish people stand by a body of water and symbolically cast their sins into the water.

HOLIDAY GREETING: L’Shanah Tovah U’metuka (“May you have a good and sweet new year!”) and Chag Sameach (“Happy holiday!”).

Your ticket for the: Rosh Hashanah: Feast of Trumpets