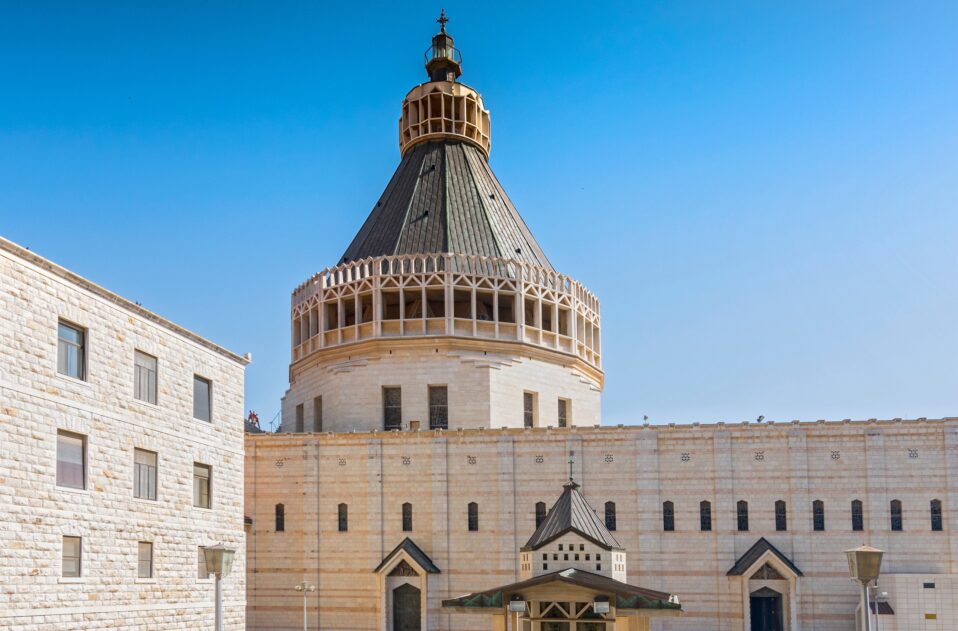 Nazareth—the boyhood home of Jesus—sits on a limestone ridge (the Nazareth Ridge) in the Lower Galilee that separates the Jezreel Valley to the south from the Beit Netofa Valley to the north. Nazareth first appears in ancient literary sources in the New Testament (Matthew 2:23; Luke 1:26; Luke 2:4, 39, and 51). According to Luke, Jesus’ mother, Mary, came from Nazareth (1:26). Matthew relates how the Holy Family, after returning from Egypt, relocated to Nazareth (2:19–23). Jesus taught in Nazareth’s synagogue (Luke 4:16-30), and as His popularity grew, He became known as “Jesus from Nazareth” (Matthew 21:11).

Although Nazareth is not mentioned in ancient sources prior to the New Testament, archaeologists have uncovered remains from the Middle Bronze Age (time of the Patriarchs), Iron Age II (time of kingdoms of Israel and Judah), and the late Hellenistic eras. The discovery of tombs from the early Roman period (first century B.C. to second century A.D.) indicates the limit of the village, as Jews do not bury their dead inside of cities or villages. The site in the first century covered an area of about sixty 60 acres, with a population of maybe perhaps 500 people.

Ancient Nazareth sits 3.8 miles (about an hour-and-fifteen-minute walk) to the south of Sepphoris, the capital of Galilee when Jesus was a boy. Its proximity indicates its dependency upon Sepphoris; moreover, its location between the Jezreel and Beit Netofa Valleys, both of which contained international travel routes, suggests that Jesus was anything but “a hick from the sticks.”

Archaeologists uncovered what they tentatively identify as a Jewish ritual immersion bath from the early Roman period. If they are correct, it may point to the location of the synagogue of Nazareth (see Luke 4:16-30). This, as well as early Christian structures, are now enclosed inside the modern compound of the Catholic Church of the Annunciation, built in the 1960s.

Later Jewish tradition identifies Nazareth as the location where the priestly course of Hapizez settled after the destruction of the Jerusalem Temple in A.D. 70; an inscription discovered in the coastal city of Caesarea, from the Byzantine period, repeats this. The church fathers Eusebius and Epiphanius indicate that the population of Nazareth was Jewish into the sixth century A.D.

By the fourth century A.D., Christian pilgrims began to journey to Nazareth and were shown a cave identified as the home of Mary. It remains a place for pilgrims to this day. It has housed churches since the Byzantine period. Today, Nazareth contains two main pilgrim churches: the Catholic Church of the Annunciation and the Orthodox church built over the spring of Nazareth.

Your ticket for the: Biblical Israel: Nazareth