Hanukkah: The Festival of Lights 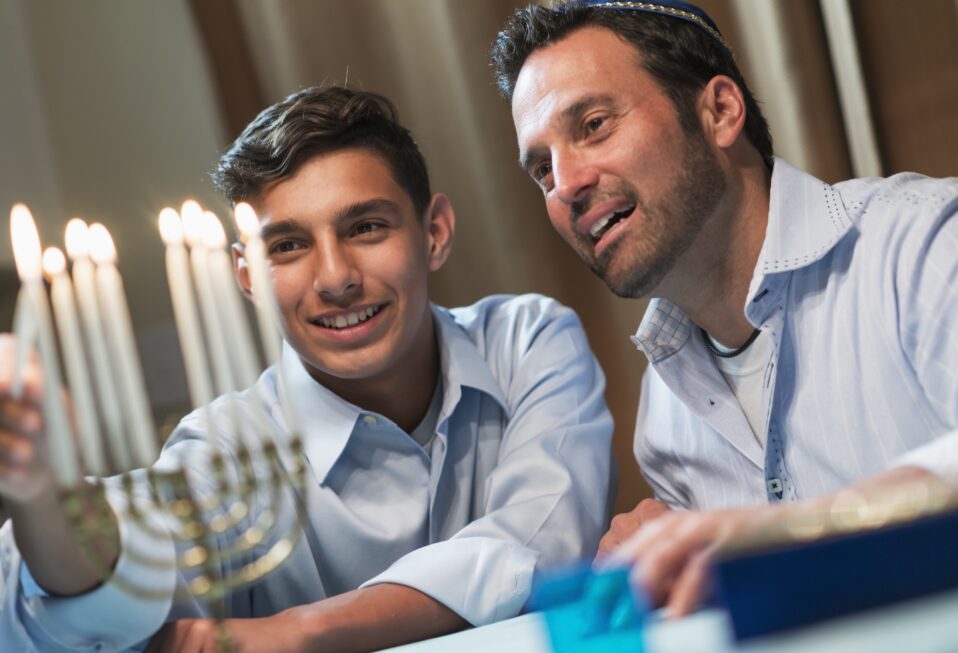 “It was now winter, and Jesus was in Jerusalem at the time of Hanukkah, the Festival of Dedication. He was in the Temple, walking through the section known as Solomon’s Colonnade” (John 10:22-23).

For eight days Jewish people around the world celebrate Hanukkah, a holiday marking a great victory over 2,000 years ago.

Also known as the Festival of Lights or the Feast of Dedication, Hanukkah is a not mentioned in the Old Testament, but it is in the New Testament.

“It’s a holiday that celebrates religious freedom and our victory against oppression and our ability to rededicate the Temple,” says Spiro.

In the second century B.C., the Jewish people in Judea revolted against the Syrian-Greek (Seleucid) conquerors.

The Syrian-Greek King Antiochus IV ruled over Israel in 174 B.C. He began to unify his kingdom by imposing pagan religion and culture on the Jews—forcing them to eat pork and forbidding Sabbath observance, Bible (Torah) study, and circumcision. Worse still, the Seleucids defiled the Temple in Jerusalem and dedicated it to the Greek God Zeus.

Mattathias, a sage from the village of Modiin, and his five sons took a stand against the prohibitions and idolatry and fled to the hills of Judea. There they raised a small army and engaged in guerilla warfare against the Seleucid Empire.

Before his death, Mattathias appointed his son Judah the Strong as their leader. Judah was called “Maccabee,” a word composed of the initial letters of the four Hebrew words, Mi Kamocha Ba’eilim Adonai, which means, “Who is like You, O God.”

King Antiochus sent his General Apollonius to wipe out Judah and his followers, but he was defeated. So, he sent tens of thousands of more soldiers to fight. The Maccabees responded by declaring, “Let us fight unto death in defense of our souls and our Temple!” They assembled in Mitzpah, where Samuel, the prophet, had prayed to God.

Although they were greatly outnumbered, the Maccabees won and returned to Jerusalem to liberate and cleanse the Holy Temple from the idols that Antiochus had placed inside.

On the 25th day of the month of Kislev, in the year 139 B.C., the Maccabees rededicated the Temple in Jerusalem. The legend says that there was only enough sacred oil for the menorah (“candelabrum” with seven branches used in the Temple in Jerusalem) to burn for one day but when they lit it, it miraculously burned for eight days—enough time to purify more oil. That’s why Hanukkah lasts for eight days.

The Maccabees were also important in early Christianity. Recently, archaeologists uncovered tombs believed to be those of the Hasmoneans about a mile from the modern Israeli city of Modiin and about 20 miles from Jerusalem in the area where the Maccabees would have lived.

At the site, there was a mosaic floor with a cross on it. Archaeologists suggest that Byzantine Christians found the original tomb and decorated it with the mosaic.

“The Maccabees were Jewish leaders, Jewish rebels. They removed the Greek empire and Greek presence from what is now modern Israel and they established an independent Jewish state, which makes it significant to both Judaism and Christianity,” says archaeologist Dan Shachar.

Another indication of their importance to early Christians is that the books of the Maccabees are part of the Apocryphal books, canonized as part of the Catholic and Greek Orthodox Bibles, but they are not part of the Jewish or other Christian Bibles.

Today, Jewish people light a special Hanukkah menorah, called a Hanukkiah with nine branches—one for each of the eight days and an additional one called the shamash or “servant candle” used to light the others. Each day an additional candle is lit so that by the eighth day they are all ablaze.

Because of the oil, eating delicious fried foods like latkes (“potato pancakes”) and soufganiot (“jelly donuts”) is another Hanukkah tradition.

Hanukkah falls around and sometimes coincides with Christmas time. Children are often given presents each day of the holiday.

Spiro says there’s a message in the holiday for today.

“The world’s coming up against Israel. The wolves are circling the sheep. This is nothing new, and the message for Hanukkah is no matter what happens our candles burn bright,” she says. “Civilizations have come and gone, but the Jewish people are still here.”

Your ticket for the: Hanukkah: The Festival of Lights

Hanukkah: The Festival of Lights