The Israel Law Center: Fighting for Justice on Court Battlegrounds 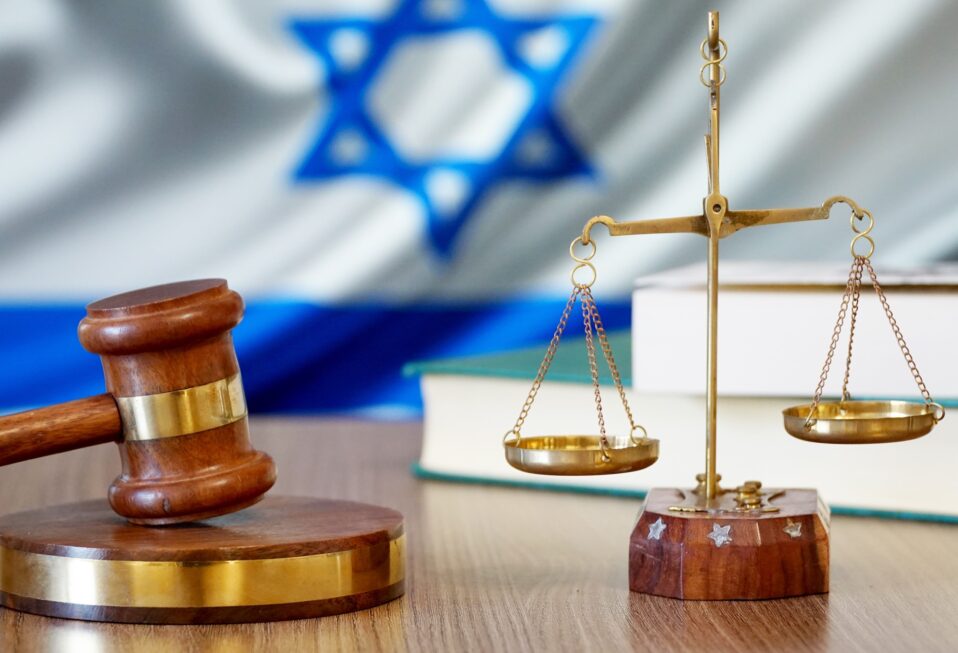 “Money drives terrorism,” declares prominent American attorney Alan Dershowitz. “If funding is cut, terrorism is reduced.” So says Dershowitz in his review of Nitsana Darshan-Leitner’s 2017 book Harpoon: Inside the Covert War Against Terrorism’s Money Masters. The book addresses Israel’s tactics of starving terrorist organizations of the funds they need to launch their attacks—by destroying the numerous money pipelines that feed them.

Author Darshan-Leitner is an Israeli attorney who in 2002 founded Shurat HaDin, the Israel Law Center (ILC), a non-governmental civil-rights organization. She is an expert litigator in cases involving a wide range of unprovoked terror acts against Jews. Nitsana uses a posture of offense, not defense, to prosecute Israel’s enemies in court battlegrounds around the world—in Israel, the United States, the International Criminal Court (ICC), and beyond. Shurat HaDin also networks with Western intelligence agencies, law enforcement, and volunteer lawyers internationally to file legal actions.

The organization is fully aware that, in a world infected with escalating anti-Semitism, terrorism can take many forms. While Israel’s military protects its citizens in the air, on land, on (and under) the sea, and on the internet, justice for victims of terrorism and their families is more vital than ever. That’s why the ILC is working to resolve such issues in a lesser-known battlefield: the courts.

Dershowitz commends Nitsana and her efforts: “I have followed the work of Nitsana and her Israel Law Center in Tel-Aviv since its inception … noting her continuous successes both in and out of the courtroom, while admiring her innovation and determination. … She truly reflects the best of the next generation of advocates for Israel and young leadership dedicating their extraordinary creativity and talents for the benefit of the world Jewish community.”

Indeed, Darshan-Leitner’s  expertise was on display during her briefing at the Israel Government Press Office (GPO) Christian Media Summit that I attended in 2018. I sat riveted as she opened our eyes to the multi-layered nature of terrorism and anti-Semitism. It was at once frightening and hopeful. Shurat HaDin not only takes on cases for Israeli terror victims but also against enablers of the Boycott, Divestment, and Sanctions (B.D.S.) movement—economic warfare targeting Israel. Some of the litigation has taken years to move through the courts but persistence, strategies, and skill win the day, at the very least sending a strong warning to terrorists.

Shurat HaDin has won billions of dollars in judgments for its plaintiffs and millions in recompense to individuals and families. But collecting the monies can be a convoluted path. Some successes yield a fraction of what the courts awarded, as nations like Iran, North Korea, and Syria ignore the court decisions.

Despite setbacks and challenges that seem unsolvable, Shurat HaDin and similar organizations are vitally important in their pursuit of justice. It is the right thing to do. As renowned author and Holocaust survivor, Eli Wiesel, famously declared, “We must always take sides. Neutrality helps the oppressor, never the victim. Silence encourages the tormentor, never the tormented.”

The Israel Law Center’s work for justice continues to expose many examples of terrorism. In October 2014, a Palestinian rammed his car into a group of Israelis exiting a light-rail train in Jerusalem, killing a 3-month-old baby and injuring others. The lawsuit accused Iran and Syria of “material support” for the terrorist’s attack. Israel Law Center won a stunning $178,500,000 judgment for the family against Iran and Syria in January 2017, which was later reversed and is pending appeal in the courts.

In 2011, two Palestinian terrorists slithered under a fence at night into the Jewish town of Itamar in Samaria. They entered the home of a sleeping family and slit the throats of the parents and three of their six children. In 2018, family members filed a lawsuit against the Palestinian Authority (PA), Palestinian Liberation Organization (PLO), the Popular Front for the Liberation of Palestine (PFLP), and the terrorists themselves. An extended family member said on behalf of the family, “From our point of view, the claim is meant to send a message: anyone with blood on his hands who carried out the massacre of our beloved family will not get away and will pay a heavy price.”

Of special interest right now, with Facebook, Google, and Twitter shutting down conservative free speech, the Israel Law Center has been engaged in cases against the social media giants since 2015. Darshan-Leitner is prosecuting a lawsuit for five families whose loved ones were murdered by Hamas and Islamic Jihad between 2014-2016. The suit charges that social media companies have allowed the Gaza-based terrorists, Hamas, to use their platforms for hate and violence against Jews.

Although Facebook finally placed a new ban on Holocaust denial in 2020, Darshan-Leitner notes that it’s only a first step. In an interview with The Allgemeiner—which purports to be the fastest-growing Jewish newspaper in America—she says, “The courts have been wrongly ruling that the social media giants such as Facebook cannot be considered, under the Communications Decency Act’s Section 230, to be the publisher of the messages posted by third parties. Accordingly, the courts have been providing Facebook a blanket immunity on permitting the extremist messages.” She also observes that “almost all of the cases in recent years involving attacks on the Jewish community can be traced back to social media.”

Churches are not immune either when they get involved in requesting corporations to divest from business interests in Israel. When the Presbyterian Church USA passed its 2014 resolution on divestment from Israel, it voted to sell stock worth $21 million from Hewlett Packard, Caterpillar, and Motorola. In response, Shurat HaDin filed a complaint asking the IRS to revoke PCUSA’s tax-exempt status.

Shurat HaDin acted on behalf of a Palestinian couple in one fascinating case. In 2016, terrorists shot and killed a rabbi driving his car near Hebron, and seriously injured his wife and children who were passengers. The Palestinian couple stopped, heroically risking their own lives from a terror attack. They rescued the children and called an ambulance. To protect their future safety, Shurat HaDin intervened legally to help them obtain Israel residency so that they could relocate.

An imposing court battleground is the International Criminal Court (ICC), an arm of the United Nations, at The Hague, Netherlands. Shurat HaDin has been closely documenting the Palestinian Authority’s allegations against individuals in the Israel Defense Forces (IDF) at the ICC for war crimes. In three Hamas-instigated wars from Gaza, the IDF have been forced to defend southern Israel’s civilian population. Following the example of the United Nations’ uncalled-for lies and resolutions against Israel, the ICC barely considers the role of terrorist instigators. Therefore, it is ill-advised for any Israeli, military or civilian, to undergo a potentially biased ICC investigation, especially since Israel itself conducts its own inquiries when necessary. The U.S. and Israel have refused ICC membership, questioning the fairness and objectivity of the court.

In August 2020, the United Nations Office on Drugs and Crime (UNODC) sent a press release about their virtual seminar on connections between terror and money. One thousand people participated from 134 Member States, 88 civil society organizations, 47 international organizations, and 40 United Nations entities. Their list of recommendations sounds impressive and includes halting money laundering and strengthening border security. The ICC has jurisdiction over four major concerns—genocide, crimes against humanity, war crimes, and crimes of aggression. Indeed, if these nations and organizations would fairly enact their recommendations, maybe, just maybe, a better world would emerge.

Despite what the U.N. does or does not enact, Nitsana Darshan-Leitner’s comment below is a strong appeal to Jews and Christians to help “repair the world” (in Hebrew, tikkun olam).

“We believe that the slogan ‘never again’ means first and foremost that no one can murder Jews and simply walk away. There has to be a heavy price, and simply forgiving … or shrugging our shoulders means that Jewish blood will be deemed cheap in the eyes of the nations.”

Join CBN Israel this week to pray for Nitsana and others like her as well as the many Jewish victims they help:

May the examples of Nitsana Darshan-Leitner and Shurat HaDin inspire us not only to pray but also to act and do all we can to stand with Israel and the Jewish people by opposing the toxic poison of anti-Semitism and all forms of terrorism against Israel and her people.

Your ticket for the: The Israel Law Center: Fighting for Justice on Court Battlegrounds

The Israel Law Center: Fighting for Justice on Court Battlegrounds