When Evil Demands an Encore, Stop It in Its Tracks 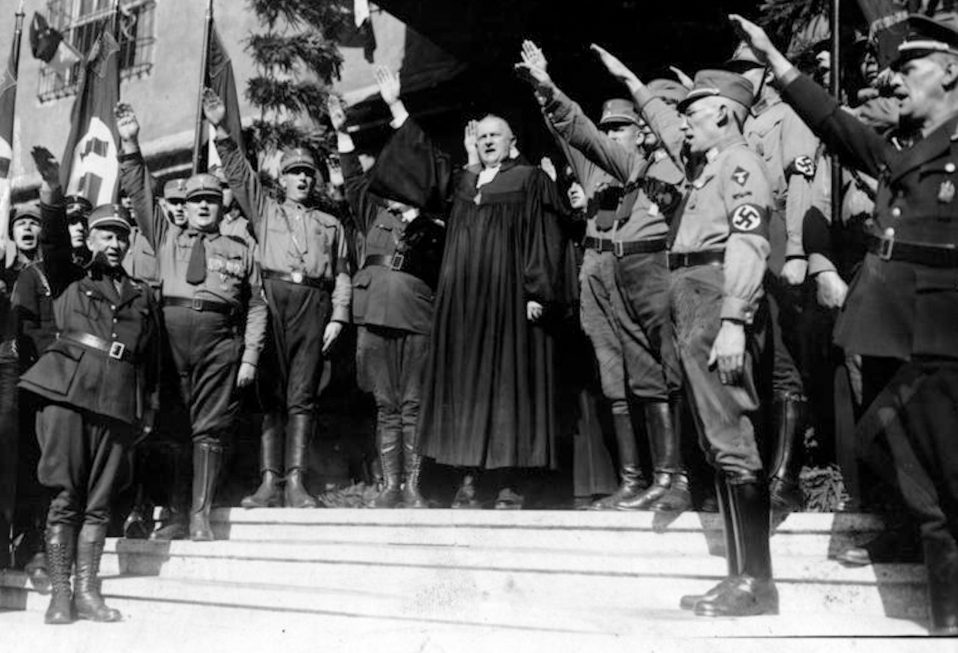 In 1925, Hitler’s book Mein Kampf (“My Struggle”) was published, containing the script for Hitler’s genocidal plan. He wrote it while serving only nine months of a five-year sentence for attempting to overthrow the German Republic in 1923. It began in a beer hall. German beer halls not only served up beer but drew crowds for political debates and rallies. While his coup—the Beer Hall Putsch—was unsuccessful, Hitler’s prison-penned book set the stage for the unimaginable evils that followed.

When the Allies liberated the European concentration camps 20 years later, “Never Again” grew into a horrified watchword as the shocking results of the Jewish genocide fully came to light. Nations around the world solemnly assured one another, “Never again!”

Yet, unbelievably, between 1945 and today “Never again” has become “Now again.” Anti-Semitism is making another appearance on many world stages. As British Prime Minister Winston Churchill paraphrased philosopher George Santayana, “Those who fail to learn from history are condemned to repeat it,” an admonition that we would do well to heed.

For us in the Christian community, 1 Peter 5:8 describes the challenge in this way: “Be alert and of sober mind. Your enemy the devil prowls around like a roaring lion looking for someone to devour.” This verse not only applies to our personal spiritual lives but also pertains to our testimony as Jesus’ followers who care for the well-being of others.

Indeed, the lion of anti-Semitism is loose and prowling right here in the United States.

Hopefully, the Christian community will be “alert and sober,” especially with the April 2021 release of the Family Research Council (FRC) analysis, “The Resurgence of History’s Oldest Hatred.” Authored by Christopher Gacek and Lela Gilbert, the report is a wake-up call. We must not be an audience sitting back watching the evil encore play out; we ourselves must become actors opposing anti-Semitism wherever we see it in our own nation.

FRC’s research covers the last year-and-a-half of incidents in the U.S. Most of us are aware of daily anti-Semitism aimed at and within the Jewish state. Yet anti-Semitism is not just “over there.” The FRC analysis identifies four kinds of anti-Semitism in the United States: hard-right political, black separatist, Islam-based, and hard-left political. No matter where it exists, it is unacceptable—whether it is verbal abuse, property destruction, assault, or murder.

The FRC report highlights 100 sample cases since January 2020, but the total number of incidents is far higher. FBI tracking shows that anti-Semitism is increasing. Their statistics note that incidents “hovered around 625 in 2013, 2014, and 2015. Since then, the total climbed precipitously to 953 anti-Jewish incidents in 2019 when they constituted 62.7 percent of all religion-focused incidents.”

The FRC report shows that anti-Semitism comes in many different forms. We have seen anti-Semitic graffiti at synagogues. Groups that carry Nazi flags, or wear “6MWE” T-shirts, meaning “Six Million Wasn’t Enough.” A Jewish high school student being told that “all Jews and Israelis deserve to go to hell.” Saturday Night Live got in on the anti-Semitism in a parody: “Israel is reporting that they vaccinated half their population, and I’m gonna guess it’s the Jewish half.” Dylan Rodriguez, the president of the influential American Studies Association (ASA), commented via Twitter that Zionism has “politically toxified our schools” and that “a number of Zionist organizations want to convince us that Arab American Studies is ‘anti-Semitic.’” He also said that Zionism is “intellectually insulting” and racist. If Mr. Rodriguez does know that Israel has 1.5 million Arab citizens, he is making no mention of that fact.

One of the most welcoming—and disturbing—venues for anti-Semitism is American college campuses. Both Jewish and Christian students are intimidated by those who adhere to the Boycott, Divestment, and Sanctions movement (BDS). BDS is economic warfare against Israel, its businesses, and products. It is anti-Semitism in disguise. On college campuses, BDS is carried out not only by students who are members of organizations like the National Students for Justice in Palestine (SJP) but also by professors—who limit, delete, or penalize free speech, even about Jews and Israel.

One of BDS loyalists’ favorite tirades is calling Israel an “apartheid” state. Apartheid, a system of institutionalized racial segregation that existed in South Africa, is an irrational description hung around Israel’s neck. It goes against the facts. Notably, Israel is the only country in the world that has brought black Africans to freedom. Since the 1980s, Israel has financed airlift rescues and resettled thousands of Ethiopians of Jewish ancestry into Israel. Operation Moses in 1984 and Operation Solomon in 1991 (and additional flights since) have resulted in another vibrant community of Jewish immigrants. Ethiopian citizens now number more than 130,000.

That said, the decisions to first determine Ethiopians’ Jewish ancestry and then help them acclimate to life in Israel are not without problems. Although Ethiopian Jews have risen to serve in the Knesset, medicine, and with distinction in Israel’s military—and they enjoy superb education opportunities—controversies and challenges have accompanied their assimilation. Nevertheless, the fact remains: Israel is not an apartheid state.

My guess is that many who falsely claim Israel has an apartheid system have never gone to Israel. It is a colorful nation of Jewish—and Arab, Druze, and Christian—cultures. Walking in Jerusalem’s famous Mahane Yehuda market, shoppers mingle together. They are Asian, African, Middle Eastern, and European. Eyes of blue, brown, green, and black shine as they pick out the beautiful fruits, meats, and vegetables with black, brown, and white hands.

I am grateful for FRC’s report yet concerned about our American churches, too. While Christian support for the Jewish community and Israel is at an all-time high, many pastors and congregations might be unaware or apathetic about growing anti-Semitism in our own country.

Revisiting the history of German churches in the lead-up to and during World War II serves as a warning. German theologian and Lutheran pastor Dietrich Bonhoeffer was an anti-Nazi dissident and key founding member of the Confessing Church, which was established to keep the Protestant church free of Nazi influence. He spent years trying to convince his German clerical colleagues to renounce the evils of Naziism.

Under the Nazis, about 70 percent of the German population was Protestant. Skidmore College Professor Matthew D. Hockenos, a specialist in 20th-century European history, authored A Church Divided: German Protestants Confront the Nazi Past. In one of his essays about Bonhoeffer he noted that German Protestants basically split into three groups. First was the ultra-nationalist, anti-Semitic, and pro-Nazi Christian movement. Second was the Confessing Church, which was a movement that arose in opposition to government-sponsored efforts to unify all Protestant churches into a single pro-Nazi German Evangelical Church. The third group was made up by the Protestant groups who decided to remain neutral.

He goes on to explain how many Germans fell into each group: “Of the eighteen thousand Protestant pastors in Germany, less than one-third were adherents of the German Christian movement. Although the number of pastors who joined the Confessing Church reached just over seven thousand in January 1934, for most of the period of the church struggle from 1933 to 1945 the number was less than five thousand.”

The divisions between denominations regarding a response to Hitler and his Nazis are clear. Yet it is also clear that far more opposition from the religious community was called for. The Nazis finally imprisoned Bonhoeffer in Flossenbürg concentration camp and then hanged him in 1945 shortly before the war ended. He was willing to die if necessary, in his opposition to what he knew was absolutely wrong.

As anti-Semitism is now inserting an encore of evil, I hope and pray that the American church will embrace Bonhoeffer’s extraordinary faith and example. Courage cannot go missing in action. It is important to remember that when the devil is prowling, it’s a stealth operation at first—a little here, a little there—small actions that remain unopposed grow into manifestations of evil that are difficult to stop. We must remember that the world’s oldest hatred against the Jews is an attack on God Himself for choosing them as vessels for His redemptive plan.

What can we do?

First, rely on the Bible, our ultimate guidebook, where we learn that the Jews are His chosen people—the ones whom He chose to transcribe His thoughts and His love to redeem His world. Our Jewish Savior was literally born in the cradle of Judaism.

Secondly, I encourage you to support organizations like CBN Israel, which gives Christians the distinct opportunity to reach millions worldwide with unbiased news and films that tell the true story of Israel while also providing humanitarian relief to Israelis in need—including aging Holocaust survivors, victims of terror, families in crisis, and new immigrants making their prophetic return to their ancestral homeland.

Furthermore, take it upon yourself to promote and share the truth. Post special stories and reports on social media from the CBN News Bureau in Jerusalem. Host a movie night at your church or in your home featuring one of CBN’s critically acclaimed films about Israel. Invite a guest expert on Israel to speak at your local church, small group, or Sunday school group. Whatever approach you take, know that you can make a difference in helping to change the conversation about Israel and the Jewish people.

Finally, become a strong advocate for Israel and follow in the footsteps of Esther and Moses who lobbied their leaders and saved their Jewish people. Today, willing Christians can continue to make an indelible mark in the U.S. Congress to advocate for the U.S.-Israel relationship through the American Israel Public Affairs Committee (AIPAC) and Christians United for Israel (CUFI).

Make a friend in the Jewish community. Have coffee, share a meal. Attend their synagogue. And always pray for our nation and Israel.

When God spoke through Jewish scribes—first in the Old Testament, then in the New Testament—He bequeathed mankind a magnificent set of prayers, engraving His words into ancient and modern hearts. The Lord’s Prayer, handed down by Jesus Himself, is His royal prayer for His Jewish disciples and first-century Jewish people.

It is the most profound prayer in history for Jews and non-Jews alike. Let us pray the Lord’s Prayer this week for our nation and our Jewish citizens:

Bonhoeffer once said, “Silence in the face of evil is itself evil: God will not hold us guiltless. Not to speak is to speak. Not to act is to act.” Today, may we resolve not only to pray but also to take a stand against all forms of anti-Semitism in our churches, nation, and around the world. Together, we can make a difference, and we can stem the tide of this reemerging evil.

Your ticket for the: When Evil Demands an Encore, Stop It in Its Tracks

When Evil Demands an Encore, Stop It in Its Tracks