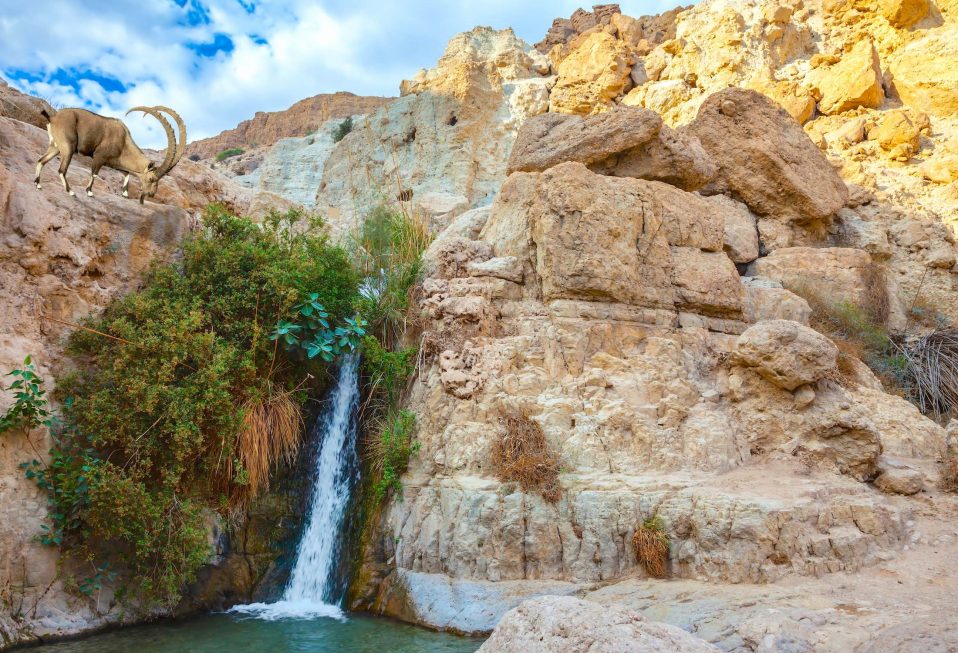 The name Ein Gedi means “spring of the kid (young goat).” Ein Gedi, which is the largest oasis on the western shore of the Dead Sea, sits between two riverbeds (in Hebrew, nahal, in Arabic, wadi): Nahal David to the north and Nahal Arugot to the south. The oasis contains four springs, Ein David, Ein Arugot, Ein Shulamit, and Ein Gedi, that flow year-round supplying three million cubic meters of water annually.

The springs have allowed habitation, which dates back to the Chalcolithic period (ca. 4000 B.C.). Its most continuous inhabitation goes from the beginning of the seventh century B.C. until the early Arab period as indicated by archaeological and literary evidence. The book of Joshua locates Ein Gedi within the tribal territory of Judah (15:62). Ein Gedi’s location within the tribal territory of Judah explains David’s use of the oasis when he hid from Saul (1 Samuel 23:29; 24). During the biblical period, a road from the southern end of the Dead Sea and the lands to the east, Moab and Edom, ascended from Ein Gedi into the central hill country towards Bethlehem.

Although located along the arid shores of the Dead Sea, the fresh-water springs and temperate climate year-round allowed Ein Gedi to flourish as a place of agriculture. Date palms and perfume-producing plants became the primary crops of the oasis. The book of Ben Sira mentions the date palms of Ein Gedi.

In the first century B.C., the arrival of hydraulic plaster from Italy in Judaea enabled the Jewish leaders, the Hasmoneans, to construct aqueducts at Ein Gedi, which allowed them to expand the agricultural production at Ein Gedi. During the first century B.C. and A.D., Ein Gedi produced a perfume, balsam, which served as the cash-crop of the kingdom of Herod the Great and Judaea. It was exported all throughout the Roman world. Herod the Great’s construction of the palace fortress of Masada, just south of Ein Gedi, served to protect the produce of the balsam.

The dates of Judaea also were exported to Italy. The site of Ein Gedi was destroyed during the First Jewish Revolt (A.D. 66-73) but rebuilt in the years after the revolt and served as a location of a Roman garrison as well as a military and administrative center for the Jewish rebels during the Bar Kochba Revolt (A.D. 132-136). The Romans conquered Ein Gedi at the end of this Jewish revolt. Remains of the Jewish rebels and their belongings were discovered in caves near the oasis of Ein Gedi in the twentieth century.

Your ticket for the: Biblical Israel: Ein Gedi