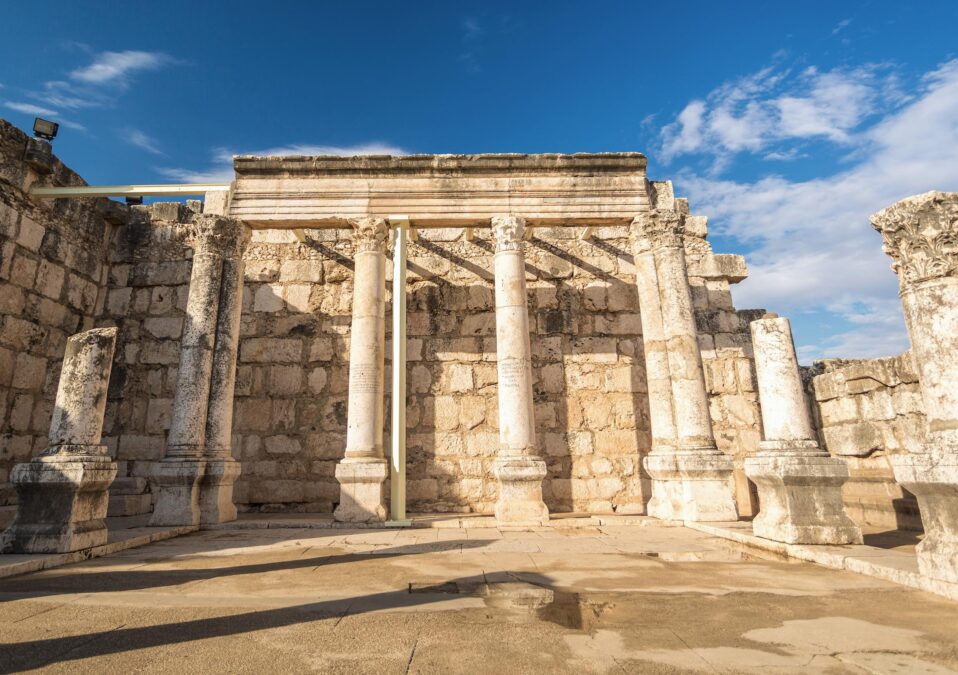 Mentioned more than any other location in the Gospels, apart from Jerusalem, Capernaum sits on the northern shore of the lake of Galilee. The Gospels indicate it served as an important base during Jesus’ ministry around the lake, with Matthew referring to it as “his own city” (9:1). He performed miracles in the village casting out a demon in its synagogue on the Sabbath, healing Simon’s mother-in-law, and caring for many who suffered. Jesus taught in the synagogue built by a centurion (Luke 7:5).

Capernaum does not appear in ancient sources prior to the first century where both the Gospels and the first century historian Josephus mention it. Its name means the “village of Nahum,” although no indication of who Nahum was is known. Archaeological excavations indicate that some settlement at the site existed as early as the third millennium B.C.; however, the village that Jesus knew began around 330 B.C. and continued until the Arab conquest in A.D. 640, when the layout of the village was significantly altered. Archaeological excavations indicate a population shift and growth took place in the first century B.C., in which the population became markedly Jewish.

The site of Capernaum today consists of two sites, one controlled by the Franciscans, which contains some houses, the synagogue, and the Christian shrine, and the other site belongs to the Greek Orthodox Church. Excavations on the Greek Orthodox property have been limited. Most of what they excavated dates to the Byzantine period (4th-7th centuries A.D.). They did discover a bathhouse (2nd-3rd century A.D.), a tomb, which dates to the 1st century, and some suggest that the sea wall of the harbor goes back to the first century as well. The more popular and developed side of Capernaum belongs to the Franciscans; however, most of the remains that visitors see date to the Byzantine period.

The synagogue that stands in the site today was constructed out of limestone, which had to be brought to the village since the local stone is the black, volcanic basalt. Certain architectural elements of the structure suggest a 3rd-4th century date; however, pottery discovered under the floor indicates that the current building was constructed in the 5th-6th century. The limestone building rests upon a basalt wall. While visitors to the site are shown this wall and told it dates to the first century, the time of Jesus, this simply does not seem to be the case. The wall supports the limestone structure above it. It is possible that they built this structure on top of the earlier, first century synagogue, but the synagogue of Jesus would have been much smaller, as excavations under the floor of the Byzantine period synagogue have revealed houses in use during the first century.

The excavated houses date primarily to the Byzantine period; however, excavators uncovered a large courtyard to a house, which dates to the first century. The homes in Capernaum reflect a style of home popular within the ancient world known as the insula. These homes surrounded a central courtyard in which much of the domestic life of the family took place. This style of home illustrates many stories in the Gospels.

Visitors to Capernaum encounter a large modern church built over a series of ancient ruins, which consist of three phases. The earliest phase consists of an insula home (200 B.C.-A.D. 135). The second phase reflects an insula sacra in which a certain portion of the house became a shrine (2nd-4th century A.D.). The final phase (5th-6th century A.D.) preserves a Byzantine shrine with three concentric octagonal walls with mosaic floors. This structure architecturally reflects a Byzantine shrine, built over a sacred site, but it is not a church. The excavators explained these three phrases as evidence of this site being the “House of Saint Peter.”

Your ticket for the: Biblical Israel: Capernaum